Published in the December 1, 2016 edition 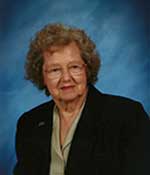 NORTH ANDOVER — Lorraine (Starkey) Redding, 99, died peacefully at Sutton Hill Center in North Andover on Nov. 24, 2016. Lorraine was the daughter of the late Olan and Florence (Russell) Starkey. She was born in Lunenburg and grew up in Keene, N.H. where she graduated from Keene High School. She moved to Boston in order to attend secretarial school and then she worked for the Bible Society. She is predeceased by her husband of 52 years, Donald C. Redding.

Lorraine worked for the North Reading School System as a bookkeeper. She attended the Union Congregational Church and volunteered as a Girl Scout Leader. Eventually Don and Lorraine moved to North Andover where she became involved with the Senior Center and took classes in bird carving, painting and knitting. She entered her art and her carvings for judging at the Topsfield Fair and took numerous ribbons.

A memorial service will be held at the Union Congregational Church, 148 Haverhill St., North Reading on Wednesday, Dec. 7 at 10 a.m. There will be no calling hours. Burial will be private. In lieu of flowers, memorial donations may be made in her name to the North Andover Senior Center, 120R Main St., North Andover MA 01845.

The Croswell Funeral Home, 19 Bow St., North Reading is in charge of arrangements.