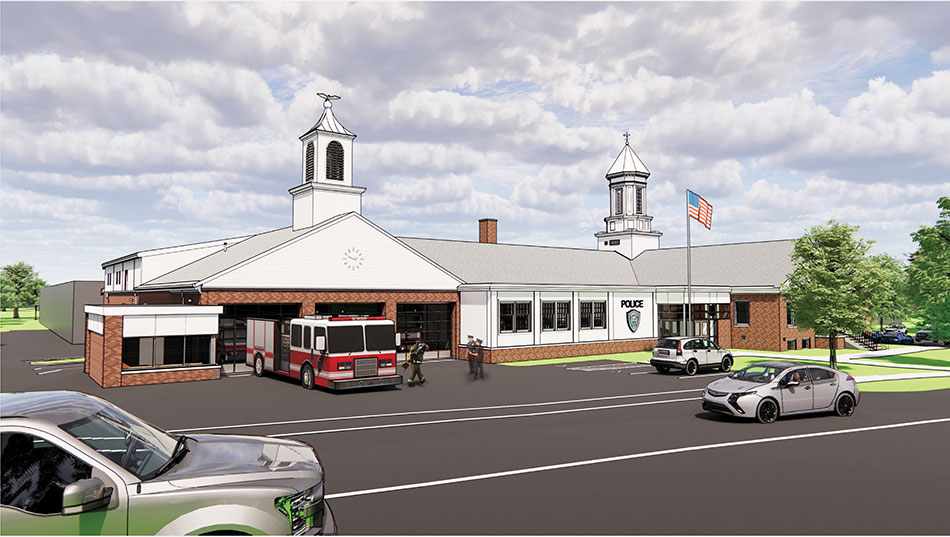 AN ARTIST’S RENDERING OF the planned renovated and expanded Fire and Police Stations and Town Hall viewed from Summer Street. (Tappé Architects Photo)

“We know these are very tough times, but we are still getting this project at a far lesser cost than if we waited,” said Dolan. “Solving this problem will never be cheaper than it is today.”

Public Safety Building Committee Chairman John Scenna recalled that the project entails constructing a new Fire Headquarters that would have four bays and would be three-stories next to the existing South Station. The project also involves renovating and expanding the Police Station, the current Fire Headquarters and Town Hall.

The Town Hall component of the project will make it compliant with the Americans with Disabilities Act (ADA). The Town Hall project includes installing an elevator and constructing a new meeting room for municipal boards and community groups to use.

Town Accountant/Assistant Finance Director Julie McCarthy gave an overview of how the project will be funded. She recalled that $33 million in debt from the school projects in the early 2000s as well as the Reedy Meadow Golf Course purchase will be expiring by the end of 2025. She said the tax impact will be based on $30.5 million instead of the full $63.5 million.

Scenna gave a breakdown of the project’s cost. He said the construction component of the project costs $52 million. He said the remaining $11.5 million is for “soft costs” that include using temporary facilities as well as purchasing new dispatch equipment, technology and furniture as well as architecture and design services.

“The buildings will be new and the technology will be new to give our public safety officers the tools and resources they need to do their jobs,” said Scenna.

“We have reached substantial completion on the elementary school projects with add-ons such as new fields, and we are going to be turning back almost $1 million to the town,” said Dolan. “We are budgeting conservatively because of the unstable environment, but we will only spend what we need to get this project done.”

“This will be bid together and will be built together by a single general contractor at a price point that we feel is very competitive in the market,” said Scenna.

“In the fall of 2023, the various departments will enter temporary quarters,” said Scenna. “We have worked out options to move police, fire and all of Town Hall into temporary quarters. In 2024 and 2025, everyone will work in their temporary quarters and the contractors will come in and work on both sites at the same time. We anticipate occupancy in late 2025 or early 2026 at the latest.”

Dolan said undertaking the project simultaneously will save the town $3.5 million.

“This project was originally a five-year project, and we have cut that in half in terms of time,” said Dolan. “The hard part operationally is we are going to displace every public safety and Town Hall employee at the same time. It’s going to be tough, but clearing out these buildings makes this project highly desirable for major contractors.”

Scenna said South Station will be razed once the new Fire Headquarters is built. The Salem Street Post Office will have to close temporarily when South Station gets torn down.

In addition to the public safety buildings and Town Hall project, Scenna said the town will be applying for a Complete Streets grant from the Massachusetts Department of Transportation that would be used to renovate the existing Summer and Salem streets intersection. He said the Complete Streets project will improve traffic flow and will allow fire apparatus to get around the area easier.

Hay also gave an overview of the project’s renderings to the Select Board and Finance Committee.

In response to a question from Finance Committee Chairman Chris Mattia, Fire Chief Glenn Davis said constructing the new Fire Headquarters next to the existing South Station would “improve service to South Lynnfield.”

Mattia also asked what the impact would be if the project does not get approved.

“It’s huge,” said Davis. “We will continue to respond as we always do. But we know that we have buildings that are not safe for our members. We will continue to ask them to do the jobs that they do, and they are fraught with liability and safety issues. It would become more difficult to recruit and retain employees with the current conditions.”

Davis also noted that the Fire Department is looking to hire more women to serve as firefighters.

Davis also recalled that firefighters’ protective turnout gear is stored next to fire engines and ambulances, which exposes carcinogens to firefighters.

“The cancer risk is huge,” said Davis. “And for us to be aware of this and not address it would be totally wrong. There is no Plan B. We need to do this project.”

Chief Nick Secatore said police officers have to use a stairwell located behind the Police Station to bring prisoners into the facility. He also noted that the women’s holding cell is located in the women’s locker room.

“The liabilities remain,” said Secatore. “We just can’t have a small solution to fix the problem. It’s the entire facility. We have outgrown it, and it provides no equity and no safety for our members. We have designed a building that will provide for that today and moving forward.”

While Finance Committee member Gene Covino acknowledged that the project is “expensive,” he said it is “fiscally responsible.”

“It’s not a luxury,” said Covino. “It’s a necessity. It needs to be addressed now.”

Dolan also noted that there will be open houses at the Police Station and Fire Headquarters on Sunday, Oct. 30, taking place from 10 a.m.-1 p.m.

For more information about the project, visit https://lynnfieldbuildingprojects.com.