LYNNFIELD — Eleven singers turned out for the Lynnfield Idol competition on Tuesday night, May 14 in Lynnfield High School’s auditorium, and three took the top spots.

Giuliana Guarracino was named winner for the Middle School Division, while Ashley Schumacher won the High School Division. Summer Street School Music Director Ben Zavisza took top honors for the Faculty Division. For their winning performances, each was given a pair of tickets to North Shore Music Theatre’s production of “Oklahoma!” and a gift card.

The singers performed two works in differing styles during Acts 1 and 2.

Guarracino dazzled in a red sequined top while performing “Something’s Got a Hold On Me” by Christina Aguilera. During Act 2, she changed into an off-the-shoulder aubergine dress while singing “Amen” by Andra Day. 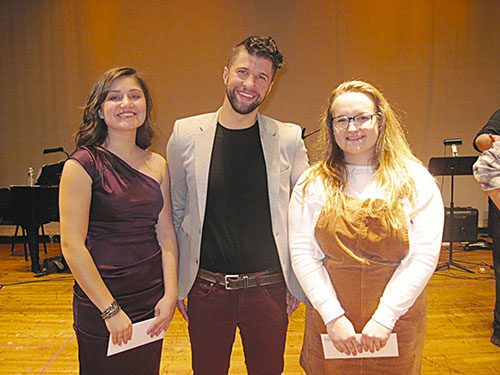 Page congratulated Guarracino on her “strong voice” while Nascembeni commented that she did a “great job.”

Schumacher performed “I Will Survive” while wearing a one-piece romper with a black and white tie at the waist and a navy blue and white striped dress for “I Surrender” by Celine Dion.

Page commented that Schumacher used her voice in a powerful way while singing “I Will Survive,” while Lewis appreciated that she acted out the lyrics of the Gloria Gaynor song.

Nascembini said she was impressed with Schumacher’s delivery of “I Surrender.”

“Who does Celine Dion?” she asked rhetorically.

Zavisza, wearing a hip jacket and pants and sporting an even hipper hairstyle, wowed the judges with his versions of “Don’t Stop Me Now” by Queen and “House of the Rising Sun” by The Animals.

Nascembeni said she was giving Zavisza extra points for his voice and moves, and Page congratulated him on his “great presentation.” Before performing “House of the Rising Sun,” Zavisza appeared on stage in silhouette against a yellow background, a design that impressed all three judges.

Zavisza said winning the Faculty Division was “a cool honor.” Schumacher said it was “so cool I won in my senior year.”

Guarracino agreed with Schumacher and Zavisza’s point of view.

“Singing is my passion. Lynnfield Idol is so much fun,” said Guarracino.

While the judges were discussing the merits of each singer and deciding on the winners, Schumacher came back on stage with her father Robert Schumacher to sing a playful rendition of “Don’t Go Breaking My Heart,” a song immortalized by Elton John and Kiki Dee. The student choral group also entertained with “Praise His Holy Name” by Keith Hampton.

Hodgkins accompanied the singers on piano, with Steven Scangas on guitar, Andrew Bond on bass and Christopher Deschenes on drums.

Based on the popular ABC TV show “American Idol,” Lynnfield Idol has been a town-wide singing competition and fundraiser for the schools’ Music Department since 2007. The event is now held every other year. Some winners have gone on to pursue careers in music.