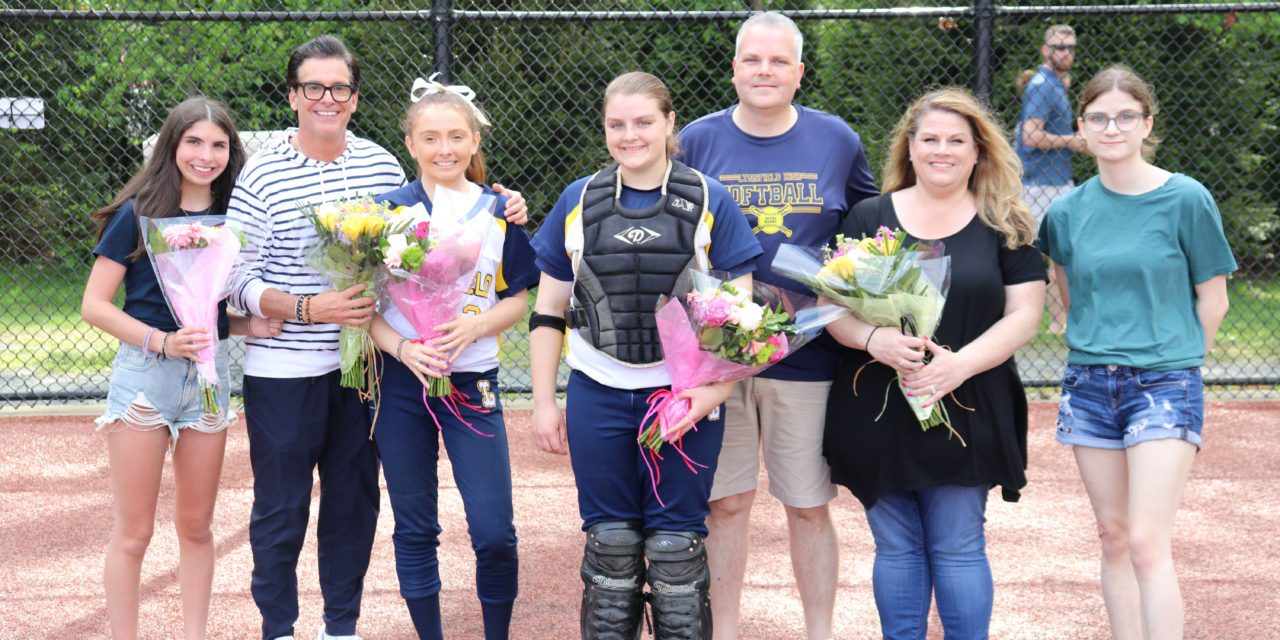 THE SENIORS on the 2022 LHS softball team were honored before Lynnfield’s 15-3 win over Hamilton-Wenham on Monday. Pictured with their families are seniors Ella Cammarata (3rd from left) and Maddie Condon (4th from left). (Courtesy Photo)

With that win, the Pioneers improved to 5-9 overall and 4-7 in the Cape Ann League.

The Pioneers honored seniors Maddie Condon (captain) and Ella Cammarata before the game.

Lynnfield, who swept the season series, broke it open with six runs in the 5th to end the game by getting the lead to 12.

“We hit the ball well and had only two errors,” pointed out Pioneers head coach Peter Marinelli. “When we play good defense, we can play with nearly everybody.”

The offense had 12 hits led by junior captain Lauren Amico who went 2 for 2 with a walk, sacrifice bunt and two runs batted in. Lulu Dias had a good day as well going 2 for 3 with a pair of walks and two RBI.

Ava Marotta was 2 for 3 with one RBI while Ava Gamache went 2 for 5 with two RBI as four players had multiple hits.

Pioneer pitcher Sophia Brown got the win going all five innings. The sophomore gave up two earned runs, six hits, one walk and she struck out three General batters. 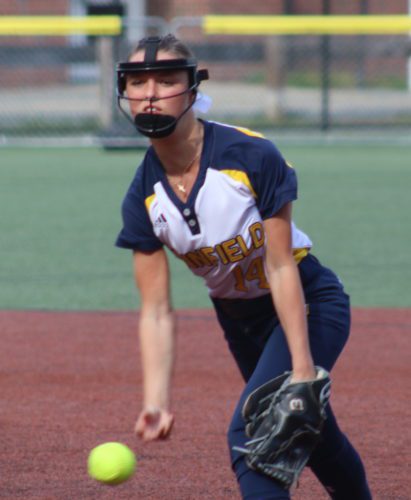 The news was not as good last Friday afternoon as they lost at Newburyport, 17-7, as the Clippers swept the season series.

“We had a very difficult time in the field as they had a lot of unearned runs,” said Marinelli, as his squad committed a season-high 12 errors that led to 12 unearned runs.

Brown pitched the entire game and did much better that the score showed. She gave up 14 hits, two walks, and struck out four. Only five runs were earned.

Lynnfield had nine hits as Dias and Marotta were both 2 for 4. Dias knocked in one run. Catie Kampersal was 2 for 5 while Libby Considine was 1 for 2 with a team-high three RBI.

Just like the Newburyport loss, the defense was the issue as the Pioneers committed six errors that led to nine Royal runs.

The Lynnfield offense had just six hits but they drew four walks and two batters were hit by a pitch.

Gamache and Celia Carbone were both 2 for 4 as Gamache had one RBI. Dias reached base three times going 1 for 2 with two walks and one RBI.

Lynnfield will host Triton on May 18 at 3:45 p.m. trying to get a split of the season series. They then welcome Boston Latin Academy in a non-league game also at 3:45 p.m.

The Pioneers will then play three games in three days early next week. On May 23, they host Pentucket. The next day, they go to East Boston but will be the designated home team in that non-league game.