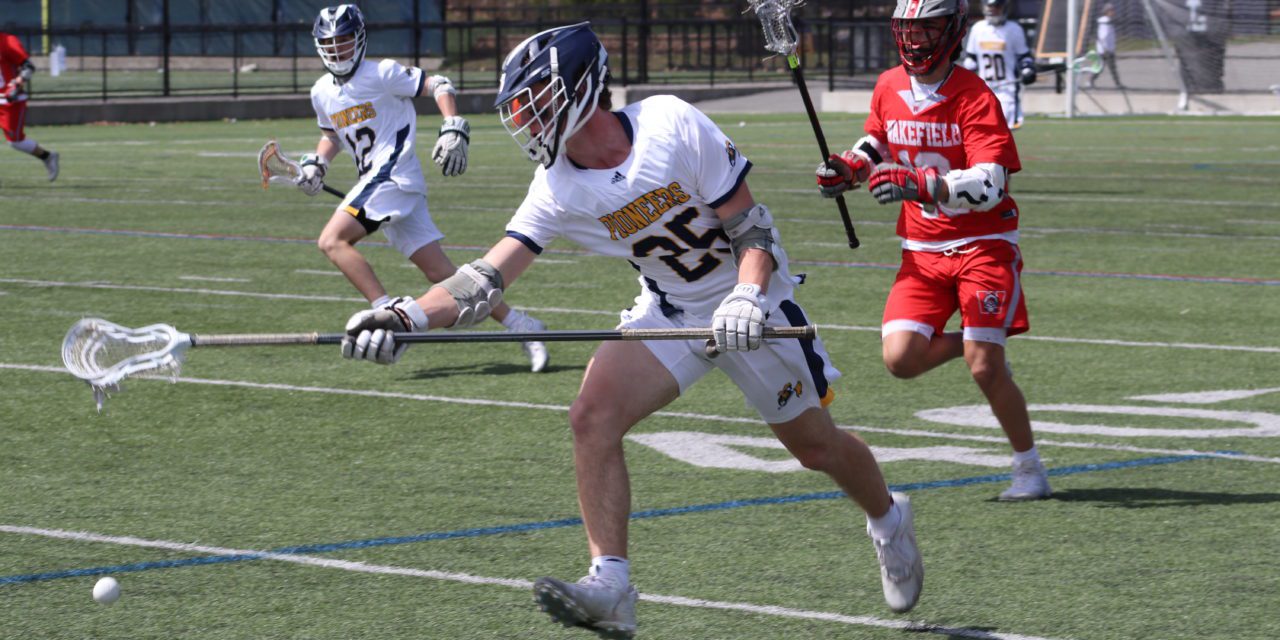 LYNNFIELD — The Lynnfield High boys’ lacrosse team won its sixth-consecutive game on Monday afternoon as they nipped visiting Triton, 12-11, on a hot, sunny day. Lynnfield was able to split the season series against the Vikings as they lost the first meeting, 12-9, back on April 11.

With that victory, the Pioneers improved to 10-3 overall and 8-2 in the Cape Ann League. Lynnfield is tied with Pentucket for second place in the CAL Kinney division.

“We knew that that were very competitive with us,” said Lynnfield head coach Pat Lamusta. “Both teams are evenly matched but our defense rose to the occasion.”

Triton cut the lead to one with just over two minutes left but the defense was able to preserve the win.

This game featured three lead changes and was tied at four at halftime.

Will Steadman led the LHS attack with six points as he had three goals and three assists. Drew Damiani had four goals and one assist while Jack Calichman had one goal and a team-high four assists.

Kelan Cardinal had one goal and one assist while A.J. Chiaradonna, Janssen Sperling and Will Norton had the three other goals. Steve Dreher added two assists.

Lynnfield goalie Ben Pimentel had 10 saves to improve to 10-3 in net.

Along with Chiaradonna and Dreher, Lamusta was also pleased with the defense of Rupert Thomas.

On May 12, the Pioneers recorded their second shutout of the year as they stomped host Somerville, 22-0, at Dilboy Stadium in a non-league match.

Lynnfield led, 14-0, at the half as Lamusta played his bench most of the second half.

Damiani had five goals and one assist while Sperling had one goal and a season-high five assists. Calichman, the team’s assists leader, had a game-high eight.

Mike Murphy found the back of the Highlanders net four times. Steadman and Cardinal both had two goals while Norton had a hat trick and two assists for five points.

Jack Phelps, Aidan Norton and Owen Doherty all had their first-career goals and Aidan Norton also had one assist. Mark Sweeney and Bryce Kay had the two other goals.

Pimentel posted his second shutout of the year with seven stops.

“That was a back-and-fourth game,” said Lamusta, as his squad led, 6-5, at halftime. “The defense had another good effort holding them to seven goals.”

Cardinal had one goal and two assists.

Chiaradonna led the team in ground balls with five.

Pimentel made eight saves in net.

On May 18, the Pioneers visit Pentucket at 3:45 p.m. They then go to Newburyport on May 20 with that contest starting at 4 p.m.

Lynnfield then welcomes Gloucester on May 24 for a non-league game that will start at 3:45 p.m.