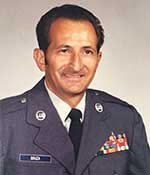 WAKEFIELD — Manuel G. Souza, 88, son of the late John Souza and Maria Nounes, known to family and friends as Manny, passed in peace in Melbourne, Florida, on Tuesday, April 24, 2018.

Manny was preceded in death by his wife Elizabeth Souza, brothers John and Joseph Souza, and son-in-law William McCauley.

Manny was born in Saugus on September 11, 1929. He grew up on Kingmont Street in Wakefield, then entering the United States Air Force, specializing in airplane and jet engine maintenance.

Manny spent the early part of his career in the 1950’s with the Strategic Air Command maintaining B-52 Stratofortress bombers used as a nuclear weapon deterrent during the height of the Cold War.

Manny’s career continued to flourish into the 1960’s when he transferred to fighter-bomber squadrons maintaining F-100 Super Sabers and F-4 Phantom fighter-bombers. He was a Crew Chief during his tour in Vietnam in 1969. It was on this tour of duty that Manny earned a Bronze Star Medal for heroic achievement and heroic service in a combat zone.

Manny retired from the Air Force, on August 1, 1972, earning the rank of Chief Master Sergeant, a unique non-commissioned rank in the United States Air Force, representing the highest enlisted level of leadership in the Air Force.

Manny enjoyed retirement with his grandchildren and family, traveling cross-country numerous times visiting his military friends. He enjoyed tending his vegetable and fruit gardens, golfing, and watching the Red Sox. Manny will be remembered for his great sense of humor, generous spirit, and the love he shared with us.

His funeral will be held from the McDonald Funeral Home, 19 Yale Ave., Wakefield on Wednesday at 9 a.m., followed by a funeral Mass in Most Blessed Sacrament Church, 1155 Main St., Wakefield at 10 a.m. Interment, with military honors, at Forest Glade Cemetery, Wakefield. Visitation for relatives and friends will be held at the
funeral home on Tuesday from
4-8 p.m.