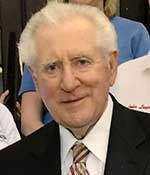 WAKEFIELD — Mario Simeola, Esq., 86, passed away peacefully in his home, surrounded by family on Monday, December 24, 2018 in Wakefield.

Mario was born on April 9, 1932 in Wakefield to Mary (DeVita) and John Simeola. He graduated from Wakefield High School in 1950, then went on to Boston College and graduated in 1954. He married Viola Corindia in 1955. Mario joined the Army and was deployed to Korea. He was First Lieutenant in the Army and was an Artillery Forward Observer. In 1957 Mario began law school at Boston College. Upon graduating, Mario began working as an attorney in Boston with his late brother-in-law, Nicholas Scali. In 1969, Mario returned to Wakefield and set up practice with Frank McGrath, the Town Counsel. Mario then opened his own law practice. His public service to the town began when he was appointed to the Finance Committee. Mario was appointed Town Counsel from 1970 to 1995. He also served as Town Moderator for several years; as well as being a longtime Trustee of The Savings Bank in Wakefield and a former member of the Board of Governors at Bear Hill Golf Club.

Mario was inducted into the Wakefield Memorial High School Hall of Fame in 2010. He remained in private practice until his retirement in 2015.

Mario was accomplished at art and golf and he loved nothing more than spending the day at his summer home in Rockport. He was a generous individual who was passionate about spending time with his family. He very rarely missed watching his alma mater, BC’s, football games on Saturdays. He was a dedicated member of Saint Joseph’s Church in Wakefield. Mario and Viola moved to Brightview Senior Living in January and enjoyed the lifestyle and community offered there. The family would like to thank the Brightview staff for their care and dedication to Mario’s comfort and dignity.

His funeral will be held from the McDonald Funeral Home, 19 Yale Ave., Wakefield on Saturday at
9 a.m., followed by a funeral Mass in St. Joseph Church, 173 Albion St., Wakefield at 10 a.m. Visitation for relatives and friends will be held at the funeral home on Friday from 4-8 p.m. Interment, Forest Glade Cemetery, Wakefield.