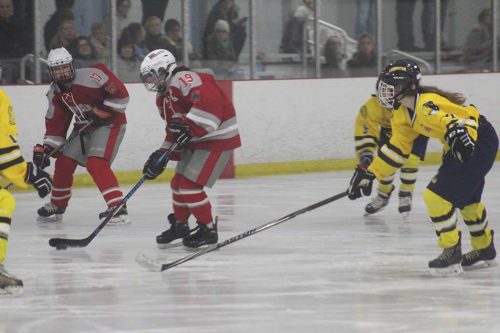 WALTHAM — Imagine this: recapping a team’s first win feels like an order of business.

That’s how the last seven days feel for the WMHS girls’ hockey team. Getting a 2-1 win over Lexington last Wednesday was an important first step for the Warriors, but Saturday night at the Burlington Ice Palace was always at the forefront of their minds and not just for head coach Chrissy Weeden.

Imagine taking a bus to your home ice rink; the rink you grew up in; the same ice you learned how to play on; the same building you played your high school hockey and against the same team and many familiar faces you coached for years. Imagine that place and reporting to… the visitors’ locker room to coach the away team. Strange.

“The emotions were high for me and the girls knew that leading up to it,” said Weeden. “It was nice to see them take the game so seriously knowing how much everyone wanted the win.”

It wasn’t just a win either. It was a 9-3 resounding statement that this team can be special. 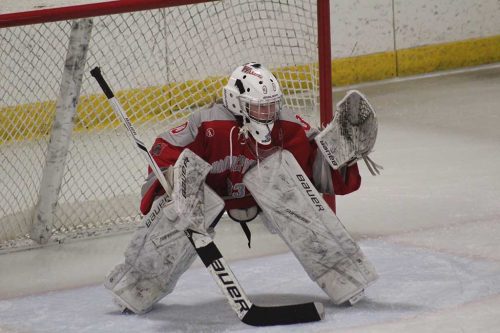 ABBY BOUDREAU picked up her first two wins of the season last week. The freshman’s 21-save 2-1 win over Lexington on Wednesday was just a bit more stressful than Wakefield’s 9-3 victory over Burlington on Saturday. (Dan Pawlowski Photo)

The Wakefield High girls’ hockey team traveled to the Edge Sports Complex in Waltham against Lexington on Wednesday. Following a couple of trademark goals by the Brooke and Caroline Lilley, the Warriors and goalie Abby Boudreau held on during a wild third period to tally the first victory of the year.

“What I said to them after is ‘two points is two points,’” said Weeden. “It was pretty ugly but a win’s a win and it feels good.”

Wakefield has been shorthanded defensively for most of the season and have had some struggles at times learning how to play without alternate captain Sarah Melanson. With only three defenseman in the rotation, the Warriors have had to adapt. Some games are better than others.

“It was a pretty tough game in the D zone tonight,” said Weeden. “We need to work a little harder to get the puck out. I’d say 90 percent of the game was in our zone, 10 percent was in theirs and we still pulled off a win somehow; I have no idea how that happened.”

Getting 21 saves from Boudreau definitely helps. The freshman was spectacular once again, not just on her initial stops but with her rebound control, freezing plenty opportunities in the crease and halting Lexington’s momentum in the process.

As for the goals, lets just call them “Vintage Lilleys.”

Caroline Lilley got the scoring started in the first. Senior Annabella Forziati put in the hard work in the corner, somehow coming away with the puck through multiple defenders and firing a centering pass, knowing full well that Caroline would be there to do the rest. Lilley was in perfect position in front of the net, a spot she earned through some tough contact and tucked it away neatly for a 1-0 lead.

“Caroline is one of our workhorses right now,” said Weeden. “She’s completely covered on that goal. The defender literally had her in a hug and she took her body around her, put her stick exactly where the puck was and put it in the net. That is a true testament of how she is as a player. Every single day of practice she’s the hardest worker. She’s quick, she’s strong, she’s smart. I’m not surprised she scored that.”

If you thought that impressed the coach, ask what senior Brooke Lilley means to the team. The captain scored on a perfectly executed 2-on-1 just two minutes into the second period. The assist went to freshman defenseman Olivia Johnson, who had a strong game herself.

Lilley went through her options while she flew down the ice and fired a shot that beat both the defender and the goalie for a 2-0 lead.

“That’s a typical Brooke Lilley goal,” said Weeden. “She has to be one of the best captains I’ve ever coached and she proves it on the ice. She goes down on a 2-on-1, zig-zags through everyone, puts the puck on net and scores. That’s how she does everything. She works hard and makes smart plays. She’s a leader on and off the ice. I’ve been impressed with her from day one.”

Wakefield held on during a hectic third that included a 42-second 5-on-3 advantage for Lexington. Wakefield’s three penalty killers, Johnson, Brooke Lilley and Hope Melanson stayed strong and Boudreau was consistent as always. The Warriors killed those 42 seconds which ended up being the difference, as Lexington scored just as Wakefield got one of their skaters back. With the goal coming on a 5-on-4 the last Warrior was released and the timing worked out as it went back to full strength. Boudreau did the rest, withstanding a 6-on-5 during the final minute to give Wakefield a huge 2-1 win.

“We have this lull about us where we go in the locker room after everything and it looks like we just lost the state championship. They needed a spark and I think this will spark them going into Burlington on Saturday,” said Weeden.

It think it’s safe to say it wasn’t so somber after Saturday’s game.

The Warriors showed up for their coach from the first second to the last at the Ice Palace and left town with an impressive 9-3 win.

Wakefield took a 4-0 lead into the first intermission after two goals from freshman Kayli Porter, another tally for Caroline Lilley and the first career goal for freshman Maeve Recene.

The two teams played to an even 2-2 in the second with Wakefield’s goals coming from Forziati and Brooke Lilley.

Wakefield emphatically closed it out in the third with goals from Erin Heffernan and two more for Caroline Lilley for the hat trick.

“It seemed to be the first game that the team truly gelled together,” said Weeden. “From door-to-door we had everyone on the same page which helped break the puck out defensively and keep the puck in the offensive zone.  We worked during the week on the little details that seemed to translate into the game Saturday night. I was proud to see some of the specific things we worked on actually succeed throughout the contest.”

For Weeden, these first two wins of her career as a head coach are more about what they mean to the team as it pertains to this season. The Warriors are now 2-1-1 as they prepare for Beverly on Sunday at Endicott College.

Yes, Wakefield picked up four points, but the girls know that Saturday’s win at the Ice Palace was always going to be for the coach.

“I would be lying if I said I wasn’t nervous before the game. I felt like I had the nerves of a player, but I was also excited as if I could jump on the ice myself,” said Weeden. “Before the game I shared with the girls that I have never been on the opposing bench and have never taken a bus to the Ice Palace before, but the sense of pride I felt in the fact that I was coaching the 23 girls in the locker room that night made it all seem normal.”

It some ways it’s a relief. Wakefield can now move on and set their sights on the rest of the season. As for coach Weeden, beating your alma mater and the school you teach at makes it official: She’s a Warrior.

“I am a proud Warrior now and the remaining 16 games on our schedule are the focus with a goal of a winning record in mind.”