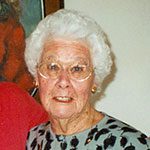 Born in Machias, Maine on July 22, 1919, she was the daughter of the late Frederick and Gertrude (Wakefield) McGuire.

Mrs. Flynn was a graduate of Machias High School, Class of 1937. She was a longtime Wakefield resident and was a member of St. Florence Church.

Mrs. Flynn was the wife of the late James L. Flynn Jr. She is survived by her two sons, James L. Flynn III of Boston and Michael Flynn of Peabody, and her two daughters, Kelly Flynn of Pelham, N.H. and Susan Spinney of Salem, N.H. Mrs. Flynn is also survived by her five grandchildren; Emily Flynn of Rockport, Natalie Mahady of Salem, Michael Tucci of Pelham, N.H., Amanda Spinney and Kaitlin Spinney, both of Salem, N.H., and seven great-grandchildren.

A funeral service will be in the McDonald Funeral, 19 Yale Ave., Wakefield on Saturday at 1 p.m. Visitation for relatives and friends will be held at the funeral home prior to the service starting at noon. Interment will be at Forest Glade Cemetery in Wakefield.