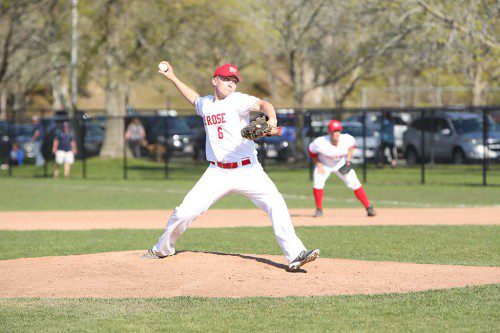 JUSTIN MCCARTHY tossed a gem against the Wilmington Wildcats on Wednesday, May 11 at Morelli field during Melrose’s 9-4 victory. (Donna Larsson photo)

MELROSE — An array of radar guns lined behind home plate could not be mistaken on a a balmy Wednesday, May 11 at Morelli Field in Melrose. Scouts were on hand to check out Vanderbilt-bound Jackson Gillis of Wilmington, widely considered one of the best prospects in Massachusetts high school baseball among MLB scouts. Unfortunately for the Wildcats, that laser focus on the towering 6’3 225 lb. Wilmington hurler allowed an unforeseen pitching gem by Melrose senior Justin McCarthy, who led Melrose to an improbable 9-4 victory in a key Freedom League clash which earned Melrose their 9th win of the season.

McCarthy went the distance for Melrose with 6 Ks and allowed just 4 runs all the while up against a behemoth. In his sophomore year alone Wilmington’s Gillis earned League MVP honors after posting a 7-2 record, a 0.86 ERA with 102 strikeouts in 57 innings.

But that was nothing that intimidated Red Raider bats on Wednesday. Perhaps someday these Red Raider batters will tell of a high school game in which they helped take an MLB pitcher out of a game.  What they did was pretty special.

Gillis indeed hits speeds of 90 mph on visible radar readings behind the plate. But he gave up runs in the first inning alone and Melrose was able to tie the game 2-2 in the second when Drew McGuire, Nick Cordeau and Alec Tauro came up big with RBI singles. Sean Connolly continued the hit parade with a single before Cal MacDonald drove in Connolly to give Melrose a 3-2 lead. Wilmington tied it up in the third with an unearned dropped fly ball in right, but from there Melrose benefitted from Gillis’ struggle with his control. Melrose’s Ryan Censullo advanced to first on a dropped third strike, then advanced and scored on wild pitches to give Melrose a 4-3 edge.

Wilmington once again tied it up 4-4 in the third on a sac fly but Melrose bats once again rose to the occasion. Cal MacDonald’s double to center scored McCarthy and Melrose took a 5-4 lead they never gave up. They added to it later in the inning when Drew McGuire scored Cal MacDonald on a fielder’s choice and a Censullo single scored Matt Cornelius. Melrose ended the inning with a 7-4 lead.

Gillis remained rather shaky and struggled with his battery mate, who allowed a number of dropped strikeouts which advanced Melrose batters to first. The Red Raiders capitalized, with Connolly knocking in Nick Cordeau for an 8-4 lead in the fourth. After a number of walks and passed balls Gillis was removed from the game and McCarthy plugged along for the win. Censullo added Melrose’s final run of the game in the fifth when he hit a bases loaded single, scoring Cal McDonald.

After securing their ninth victory of the season Melrose has hit a speed bump, with losses to Reading and Wakefield this week. On Tuesday night at Walsh field Wakefield’s Corey Imbriano nearly threw a perfect game during Melrose’s 3-0 loss. Melrose pitcher John Casparriello performed admirably on the mound and Melrose batter Stephen Guttadauro spoiled Imbriano’s perfect game by drawing a walk.

With nine wins the Red Raiders have nearly secured a playoff spot and will likely do so by next week. Their remaining schedule appears below.