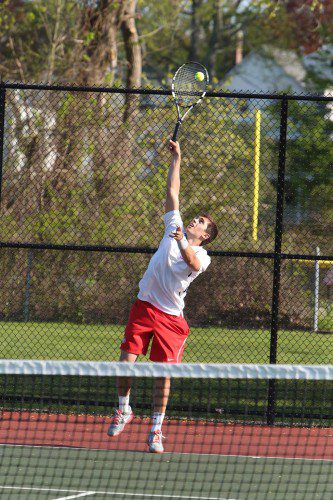 MELROSE — For the third straight year the Melrose boys’ tennis team are Middlesex League Freedom champs; only this season they made history once more. For the first time in over 60 years the Melrose Red Raider tennis team has earned sole custody of an M.L. league title, without splitting the honors such as with Burlington (as in 2014 and 2015).

For Melrose coach Matt Williams, this team doing what no other team has in modern history is a true honor.

“It’s pretty unbelievable. I’m proud for my players and in particular my captains,” he said. “And Jack Mays, Julian Nyland and Sam Stallings have stepped up this year and last to help evolve this program into something successful. Melrose historically may not be considered a tennis city. I think these kids have proved that it is now.”

Indeed. Just this season Melrose has swept their M.L. Freedom opponents to improve to 9-0 and 10-3 overall to take the title. To secure this, Melrose needed to beat league rival Burlington on Wednesday, May 11 and it was mission accomplished. Melrose pulled off a 4-1 win to clinch it.

“Sean Donovan had the match of the day,” reports his coach. “And Julian had a tough competitor in first singles and came up short, Jack in second singles won easily and Sean really had to grind out a win and he did.”

The following day Melrose extended their victory with a 5-0 win over Wakefield (3-10) under the lights of Dobbins Courts in Wakefield. Senior captain Julian Nyland was victorious in first singles, facing James Hanron of Wakefield and taking a 6-2 and 6-4 decision. Melrose’s Jack Mays earned a second single victory over Wakefield’s Noah Sellers, completely dominating in a 6-0, 6-0 win. Melrose junior Sean Donovan defeated Zack Covelle handily in sets of 6-4, 6-1.

While the Red Raiders have broken little sweat against Freedom opponents they will finish their regular season this Thursday with one eye on playoffs. Melrose advanced two rounds in the Div. 2 North playoffs last season and hope match (or beat) that achievement this spring. Says Williams, “It looks like we will open at home for playoffs, which will be a great chance for friends and family to watch them compete. We’ll be ready.”