Touched the lives of many 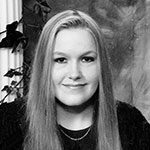 DANVERS — Melissa L. Marconnot passed away at the Kaplan Family Hospice House, after a long battle with Lymphoma, on Sunday evening, Nov. 9, 2014 surrounded by her loving family and fiancé. She was just 35 years old.

Melissa was born in Stoneham. She was raised in Woburn and was a graduate of Learning Prep in Newton. Melissa had very special relationships with her late Dad, as well as her Mom, sister, brother, niece, nephew and fiancé. She enjoyed being together with them whether it was a day of shopping at flea markets or at one of her favorite destinations such as Old Orchard Beach in Maine or Hampton Beach in New Hampshire. A yearly event that she enjoyed was a trip to the Topsfield Fair where she loved to play lots of games. Melissa had a fondness for animals most especially tigers. She loved her niece and nephew and treasured the things they gave her as well as watching them grow up. Melissa cherished her 10 year relationship with her fiancé Aaron Desmarais. Melissa will be remembered as a loving and caring woman who touched many lives.

Melissa was the loving daughter of the late Louis P. Marconnot III and Bonnie Landry of Lynn and her step–father Stephen Landry Sr. of Woburn. She was the loving sister of Michelle Bourque and her husband Steve of North Reading and Steve Landry Jr. and his fiancée Amy Stilphen of Pelham, N.H. She was the proud aunt of Nicole and Stephen Bourque Jr. and the beloved fiancée of Aaron Desmarais. She also survived by many aunts, uncles and cousins. Funeral Services were private. Memorials in Melissa’s name may be made to the ASPCA, in memory of Melissa Marconnot, PO Box 96929, Washington DC 20090-6929 or www.aspca.org Arrangements under the direction of the Edward V. Sullivan Funeral Home, Burlington. For online guestbook see www.sullivanfuneralhome.net.