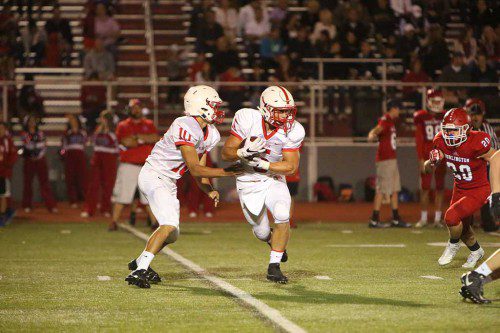 MIKE PEDRINI and QB Jack Mays did all they could on offense for the Melrose Red Raider football team, but the team fell in the opening round of the Div. 2A playoffs last Friday against Gloucester, 18-6. Melrose hosts Wayland tonight at 7:00 p.m. in consolation play. (Donna Larrson photo)

MELROSE — For the first time since 2013, the Melrose Red Raider football team will not be going to the Super Bowl.

Fans will have to wait for next year after the Red Raiders (5-3) fell to Gloucester (7-1) by a score of 18-6 last Friday in the opening round of the Div. 2A playoffs at a rainy and windswept New Balance Newell Stadium at Gloucester High.

The elements virtually took the air game from both teams, leaving it a two-man show between Melrose standout running back Mike Pedrini and Gloucester’s Christian San Filippo, the Fishermen’s all time leading rusher. Melrose ultimately had no answers for the senior tailback, who scored twice and ran for over 200 yards on 36 carries, while most of the Red Raider workload was put on the sturdy back of Pedrini, the league MVP who put up an impressive 165 yards in rushing on 21 carries, 220 yards total, including the team’s only touchdown.

Pedrini struck early on Melrose’s opening drive, breaking tackles for an 80-yard TD that was called back on a holding penalty against Melrose. That set the tone for the night, with the Red Raiders making several appearances in the red zone but stalling and finding, quite literally, the clock expiring on them.

“They were a good as advertised,” said Melrose coach Tim Morris after the game.”Tough linemen up front. Good skilled positions. We just didn’t do enough to slow their offense. We had our chances.”

Meanwhile, Fishermen defense proved to be among the toughest the team had seen all year, keeping Melrose scoreless in the first half and draining the clock in a significant way. After being forced to punt on their first possession, Gloucester found the end zone after seven plays when Jermaine Edwards scored on a 16-yard run. Gloucester then made a major dent on the clock in a 20 play drive culminated in a San Filippo touchdown (no extra point) that gave them a 12-0 lead in the second quarter.

As halftime drew near, Melrose advanced from their own 42 on a series of carries by Pedrini and a completed pass from Melrose quarterback Jack Mays. A keeper by Mays brought Melrose to the 2 yard line on first and 10 but the clock ended things and Melrose went into the half still down 12-0, but poised to get the ball back after halftime.

Returning to the field, Gloucester defense forced Melrose to turn the ball over on downs on its own 40 but Melrose defense, in turn, also forced the Fisherman to punt. The Red Raiders were finally on the board with a 75 yard Pedrini touchdown. An attempt at 2 was no good, and Melrose kept things competitive at 12-6.

Gloucester killed the clock once again on their next possession on a series of carries by San Filippo but Melrose defense stuffed Gloucester on the 2, winning the ball but with undesired field position. After failing to convert a first down they punted to advantageous Gloucester field position that allowed the Fishermen to score once more, with San Filippo once again finding the end zone for a 18-6 lead with 4:30 left in the game.

With nearly 5:00 left to play Melrose saw possession twice. Its last possession of the game was a valiant one, as Melrose’s Mays connected with Pedrini and Steven Abbott to draw the ball from the 44 to the 12. Unfortunately, Melrose ran out of juice after a series of missed passes and their playoff run ended on the field in a 18-6 loss.

“They played their heart out,” said Morris. “For that, we’re proud of them. And there is a lot of football left to play. We have Wayland this week, possibly Bedford and obviously Wakefield at Thanksgiving for a piece of the league. They’ll bounce back.”

Indeed. Melrose will play two rounds of consolation play before they take on Wakefield for Thanksgiving (on the road this year). Consolation play begins tonight at Fred Green Field when Melrose hosts Wayland at 7 p.m.