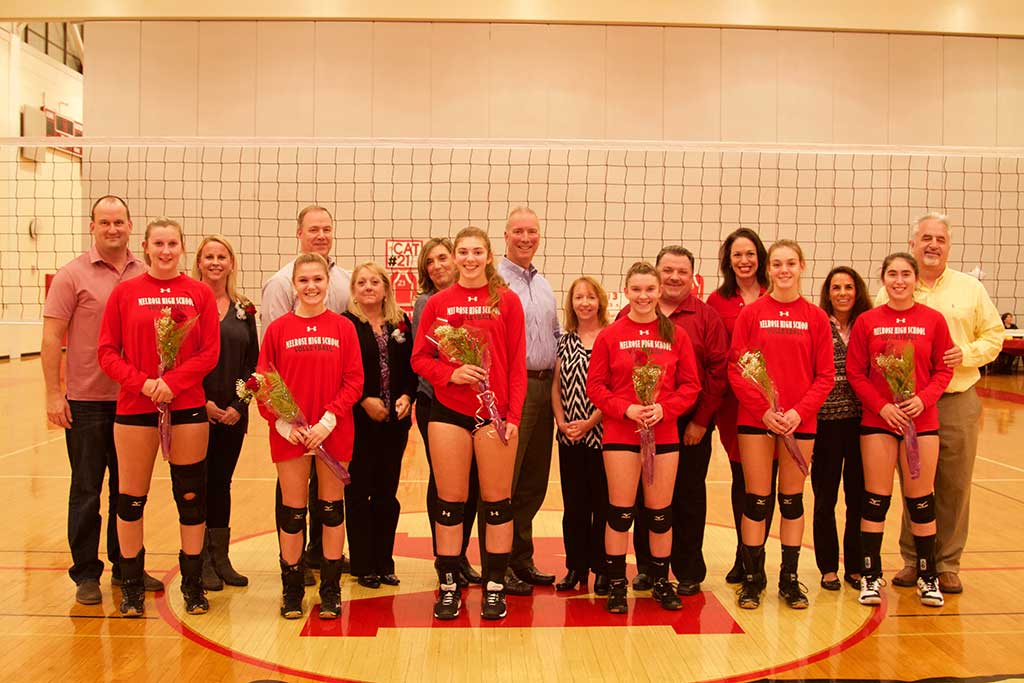 MELROSE — The Melrose Lady Raiders volleyball team has once again clinched the Middlesex League title, its 15th league championship with coach Scott Celli at the helm. Melrose went nearly flawless in league play at 15-1 and will split the honors with an improved Winchester team.

Melrose finishes their regular season 17-4 and enters the Div. 2 North playoff bracket as sixth seed, slated to host Weston at home this evening, Friday, Nov. 4 at the Melrose Veterans Memorial Middle School gym. The Wildcats come into the match at 13-5 (9-5), a slightly deceptive record, given the return of senior Athena Ardilla, an attacker whose been a nuisance to Melrose in recent seasons. The hitter was out with injury earlier in the season but has kept Weston undefeated since her return.

The Div. 2 North bracket meanwhile is a bit uneven. Normal trophy holders of the D2N (Melrose, Fenwick, Arlington Catholic, Weston) all appear on one side. The likelihood is that several of the best teams in Div. 2N will be knocked out as early as first round play. Melrose coach Scott Celli acknowledges the disparity on the bracket but remains solely focused on preparing the team. “We try not to play necessarily against another team, we just prepare our girls to focus on themselves and play their best game.”

Last week Melrose stacked their schedule against two of the best teams in the state: Westboro and Newton North. Melrose came up empty against both, but that’s what you get when you bring in the big dogs. “We started strong against Westboro, but like Newton North, we spent most of the time catching up, which makes it hard. You can’t fall behind tough teams,” says Celli.

In the game against Newton North, Victoria Crovo led in kills with 11 while setter Lily Fitzgerald had 17 assists. In their 3-1 loss to Westboro, Melrose’s Cat Torpey led on offense with 7 kills. Melrose had an uphill battle against Westboro’s Gabrielle Bailey, who registered 20 kills.

Offensively, Melrose is once again fully staffed. Leading hitter Victoria Crovo continues to put up big numbers. “She’s playing outstanding for us as usual,” says Celli, while Cat Torpey, who led against Westboro, is playing hot now. “She’s been a great hitter for us and has had a huge second half of the season,” says her coach.

Melrose’s tournament run begins this Friday at 6 p.m. at the MVMM gym.