Girls’ lax team bows out in second round 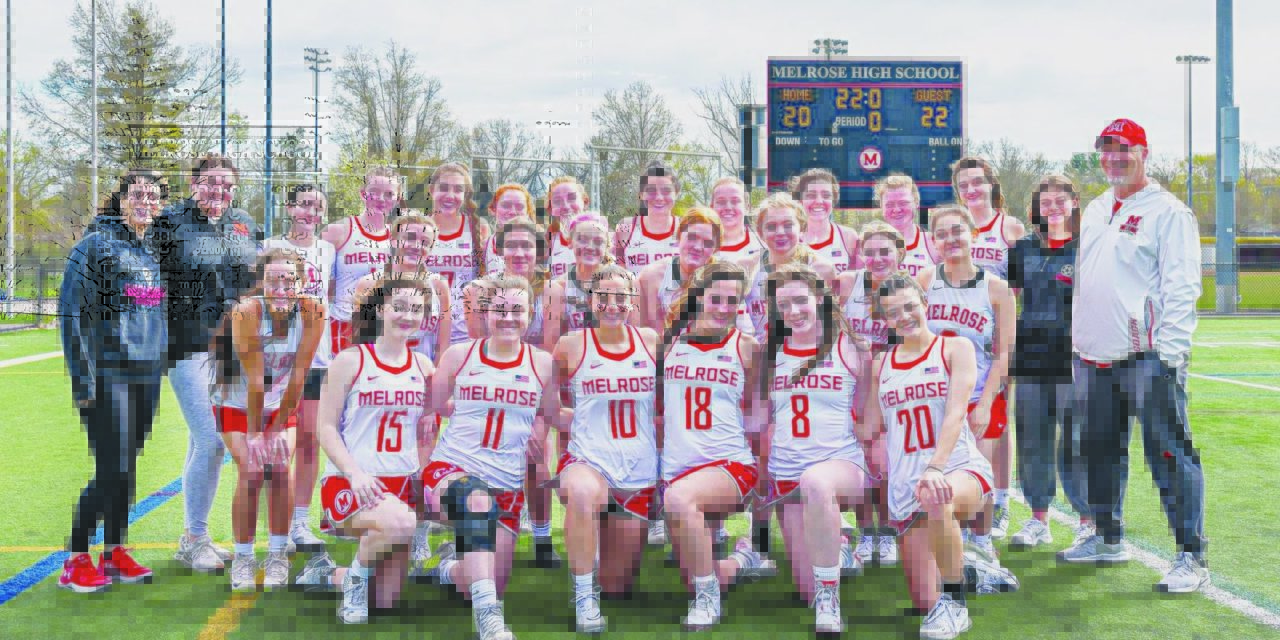 Runs into a wall against Notre Dame Academy

HINGHAM—The Melrose High girls’ lacrosse team saw their post season end on the road against #1 seed Notre Dame of Hingham. Melrose was coming off an impressive 16-12 win over Norwood and ran into a buzz saw when they traveled to face the 17-4 Notre Dame on June 9 and lost 16-0. Melrose finishes their season 10-10 overall.

“They were a tremendously talented team top to bottom and were actually quite impressive to watch,” says Melrose head coach Matt Galusi. “There is a reason they are the number 1 seed in D2 as I don’t see anyone beating them.”

Melrose almost scored when Jill Frawley rang the crossbar with a beautiful drive and shot but it was thwarted by Notre Dame’s goalkeeper.

“We played incredibly hard and tough but they were just on another level,” notes Galusi. “My girls effort was top notch but when you are playing a team of that caliber you have to play mistake free, textbook lacrosse, and even then you’ll be up against it . Lets just say it wasn’t our day.”

Still he credits the tough work of his seniors in the game. “They played extremely well and gave everything they had. Ally Maguire, Olivia Galusi, Jenna Maguire, Kate Hubbard, Rory Kirby and Kailey Donovan (injured) are all to be commended for their hard work and leadership this season.”

Overall, it was a year of many highs and few lows.

“We have come a long way since our opening day game vs Medford. We had ups and downs and lost more than a few that we probably should have won but the most important thing is how we grew as a team, as a family. These girls genuinely love being with one another and they do everything together.”

Says Galusi, “The biggest thing I want to say to my seniors is thank you. I have coached many of these girls since they were in first grade and I have loved watching them grow into remarkable young women, role models, and outstanding people. They will always have a special place in my heart and will never be forgotten.”

Melrose will return some talented starters so expect another competitive year in 2023. “Obviously we set the same goal every year, win the league and make the tourney,” says Galusi. “Once in the tourney our goal is to win as many games as possible and make the season last as long as we can. Next season will be no different as we are determined to put a banner back on that wall and make as much noise in the tourney as we can.”

All Stars were announced and those from Melrose include Ally Maguire, Megan Casey and Sophia Hitchman. Maguire was also named All Conference. Additionally Ally Maguire, Olivia Galusi and Jenna Maguire were selected to play in The Agganis All Star game which coach Galusi was selected to coach in. The game will take place on June 26 at 11:00 a.m. at the Manning Bowl in Lynn.