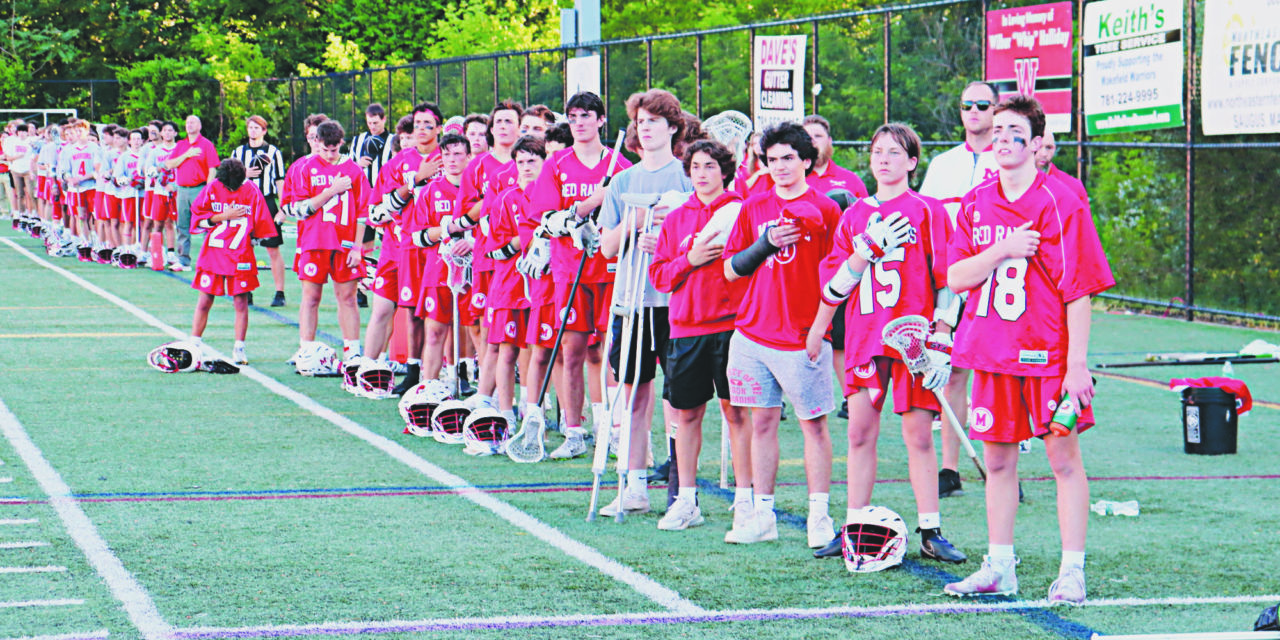 Once again faced with a playoff scenario against their rivals to the north, #16 seed Wakefield, #17 seed Melrose was prepared for a down-to-the-wire thriller when they traveled to Landrigan Field to take on the Warriors and the matchup didn’t disappoint, though the final score did hurt for Melrose, who gave up a third quarter lead and ultimately fell 13-10.

In a field of 34 teams in the Div. 2 boys’ lacrosse to bracket, it was almost wryly inevitable that Melrose were faced with the Warriors— after all, the two teams have faced each other five times since last spring. With the win, the Warriors moved on to Round of 16 play at Longmeadow High and later took a 19-5 thrashing against an impossibly tough Lancer team.

“We knew they’d be tough and sure enough they were,” said Melrose head coach Matt James. “While the game felt like it could have gone in any direction, Wakefield did a great job with their transition goals, and we made some mental errors that hurt us.”

“It’s always fun playing Melrose,” said Wakefield head coach Tim Johnson. “Don’t get me wrong, it’s stressful; we know they’re well-coached and they’re a good, gritty team. We can’t go into any game with them and think it’s an easy run. You think you’re getting momentum and then they claw back in, it’s just always a back-and-forth game. When you think about rivalries and good lacrosse games this is right up there as one of the best in the state.”

Melrose had a great amount of offense generated by a handful of players including three goals from Div. 1 recruit Liam Maher, who will play at UMass Amherst next year. He was joined by two goals a piece from Quinn Haggerty and Steve Fogarty, and individual goals from Shea Fogarty, Brady Pitcher and Max Kleinbub.

A pivotal moment came in the fourth when Wakefield defense picked off a pass with Melrose on a man-up for two minutes, locked in, trying to cut down on a 10-7 Warrior lead. That led to a Colliton goal and effectively took the air out of Melrose’s efforts. Wakefield’s Bobby DeFeo was particularly hard on Melrose, winning about 18 of his 26 face-offs, especially in the second half of the game when every minute counted.

Melrose started the game down 3-1 thanks to goals from Regan and DeFeo, balanced by a goal from Melrose’s Steve Fogarty. Melrose cut it to 3-2 on a goal from Liam Maher and behind outstanding defensive work from senior TJ Sullivan. Wakefield made it 5-2 with two goals in seven seconds early in the 2nd quarter but Melrose kept it tight with a goal from Max Kelinbub and a beautiful ground ball by TJ Sullivan who cleared the zone and essentially sent up Quinn Haggerty at the net for Melrose’s fourth goal. Wakefield held a small 5-4 lead at halftime.

Melrose came out strong in the second half, scoring two quick goals by Shea Fogarty and Steven Fogarty for a brief 6-5 lead. It wouldn’t last though. Wakefield would soon go on a brutal 8-1 run with much domination in face offs that led to quick transition goals. After the third, Wakefield was back up, 8-6, and Quinn Haggerty would try to stop the bleeding, scoring again for Melrose to make it a 13-7 game. Three more goals scored by Liam Maher (who had two in the frame) and Brady Pitcher, would narrow to the gap to 13-10 but by then the damage was done and Melrose saw themselves falling once again to their arch rivals.

This year Melrose says goodbye to seniors Brian Healy, Brady Pitcher, Liam Maher(c), TJ Sullivan, Pat Lucien, Shea Fogarty(c) and Max Kirby. “These seniors made such an enormous difference to our program. They rebuilt the culture post-COVID and mentored a young group, sharing our values and giving them much to learn. We’re grateful,” says James.

There will be tough shoes to fill to replace in Div. 1 bound Liam Maher, the team’s leading scorer and Middlesex Freedom League MVP. “Liam’s contributions and talent over the years have been immeasurable,” says his coach. “And he and Shea Fogarty are both All Conference players. We were lucky to have them.”

Other seniors such as TJ Sullivan, Max Kirby and Brady Pitcher saved the best for last. “TJ had a phenomenal year. I’m glad glad we had his skill and calming presence out there. He’s a great kid. Brady Pitcher played the best season and had his best three games of his high school career in our last games. And if you told me that Max Kirby would be this remarkable All Star when he was a freshmen, I might not have believed you.”

Melrose will return not only with their goalie, Michael Fuccione, but leading scorers Steve Fogarty and Max Kleinbub. Juniors Dan Dussault, Joey O’Keefe and Fogarty are expected to have large roles on the team, and sophomore Max Kleinbub, Colin Fahey and Jack Wright will no doubt have big seasons. Add two overachieving freshman in Quinn Haggerty (10 goals in 4 goals) and Nick Hitchman, and you have a Melrose team capable of repeating their league title next year. Stay tuned.

*Dan Pawlowski contributed to this article