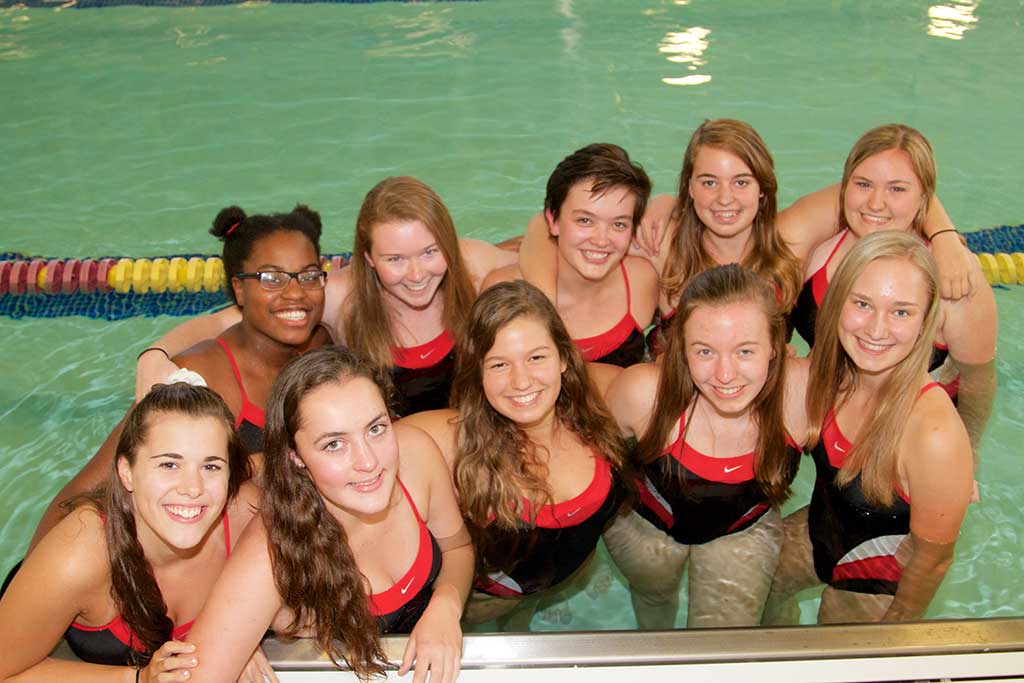 MELROSE — The Melrose High Lady Raider swim team has already shown the division what they’re capable of during their last few competitive seasons. Thus, this year was projected to be a big one. So far, they’re right on track.

Melrose has proven to be both a league menace and a team with division-best talent in their 2016 fall season. The Lady Raiders proved that with back-to-back wins last week against historically tough teams, Woburn and North Andover, to earn their fourth win of the season.

On Tuesday, Oct. 4 Melrose hosted and beat North Andover, 88-74 at the Mystic Regional Charter pool. They defeated the Knights thanks to a roster of depth, including their 200 medley relay team of Isabel Bates, Virginia Guanci, Maddy Hughes and Sam D’alessandro who earned a first place finish. Their teammates’ relay (Jennifer Kahler, Josefa Baez-Diaz, Grace Nally and Emily Boutchia) finished third which helped put Melrose ahead 10-4 after the first event.

Melrose’s Molly Williams finished first in the 200 freestyle and teammate Isabelle Bates placed second. Freshman Fiona Doyle swam to a personal best time and a fight to the finish, winning the fifth place point for the team. The 200 IM saw Virginia Guanci finishing first and teammates Alva Ronn Josefa Baeza Diaz were third and fourth to give Melrose a 33-13 lead after the third event. Samantha D’alessandro and Jennifer Kahler finished first and second in the 50 freestyle and freshmen Emily Boutchia finished fifth with a near personal best time of 30.16. “Emily has been working hard and she is riding that cusp of breaking :30,” says Melrose coach Deb Deacon.

Camila Werner, Brianna Jones and Maya Hamberg swam the second heat of the 50 free in a close race. Hamberg won the heat with a personal best time of 33.82. Maddy Hughes, Grace Nally and Julia Paiewonsky finished one, two and three in the 100 fly. The 100 free had D’alessandro winning and Kahler finishing third. The 500 freestyle had Molly Williams finishing first and teammate Alva Ronn finishing second. Delia Frederick swam a personal best time of 6:55.43. The 200 freestyle relay team of D’alessandro, Guanci, Hughes and Williams finished first of 1:52.85. Finishing third was the relay of Malika Benarieb, Josefa Baez-Diaz, Julia Paiewonsky and Emily Boutchia.

“So many girls stepped up to share in the victory,” said proud coach Deb Deacon.

On just two days rest Melrose hit the pool again to host the Woburn Tanners at the Mystic Valley Regional Charter Pool. Melrose swam to victory by a score of 93-69. Woburn took a quick lead after a Melrose DQ in the lead relay but the team of Olivia DeCecca, Josefa Baez-Diaz, Grace Nally and Jennifer Kahler finished second in the event to allow Melrose to stay competitive at 17-13.

Madeline Hughes won the 200 freestyle in a time of 2:13.29 and teammates Alva Ronn finished third and Fiona Doyle sixth in the event.The 200 IM had Guanci with the first place finish and teammate Jennifer Kahler finishing third to bring the squad closer to Woburn 22-24. The 50 freestyle had Sam D’alessandro continuing her winning streak with a first place finish and Olivia DeCecca and teammate Olivia Boutchia in a judge’s decision had DeCecca just out-touching her team mate for the third place finish; both girls swimming sub :30 for the finish. Melrose took the lead over Woburn, 33-29. Madeline Hughes, Grace Nally and Jennifer Kahler went one,two, three in the 100 fly to help Melrose pull away from Woburn, 46-32. The 100 freestyle had D’alessandro winning easily and Isabel Bates finishing second and freshman Malika Benarieb with the fourth place point. “Malika works hard every day and her times are starting to prove just what that hard work means,” says her coach.

The 500 freestyle saw Molly Williams with a personal best time this season, and according to her coach, a focus on her turns and finish for the win. Teammate Alva Ronn had a fight to the finish in the 20 lap sprint event for a third place finish, just out-touched  but a personal best time of 6:15.47. Paige Leary swam a personal best time shaving 8 seconds off her previous best for the fifth place point. The 200 yard freestyle relay team of Guanci, Hughes, Kahler and D’alessandro won the event and DeCecca, Boutchia, Benarieb and Ronn finished scond in the relay event.

The 100 back saw a one, two, three finish behind Willams, Bates and DeCecca. Swimming in the second heat of this event saw Stephanie Overlan with a second place finish 1:35.96, third place Lucie Coleman 1:36.26 and first place Katie Meade 1:26.98. The 100 breast had Guanci with the win and teammate Josefa Baeza-Diaz with the third place finish and senior tri-captain Molly Bright earned the fourth place points in a personal best time of 1:36.28.

After their second win of the week, Deacon credited the girls’ tenacity. “The girls are improving with each meet, getting in better shape and swimming well. We continue to work hard as we have a demanding competition schedule and of course we are looking forward to League Meet and after season Sectional and State competition.”

This week Melrose faces Winchester on Thursday (post deadline) and next week Haverhill will be their Senior Meet and with 10 seniors graduating. “It will be bittersweet for sure,” says Deacon.

Melrose’s last dual meets finish on the road at Wakefield and Stoneham before League Meet preparations begin. Melrose can be expected to be a major threat at the M.L. League Meet which takes place on Nov. 3 at Bentley College. Stay tuned.