Man of many interests enjoyed taking the new road 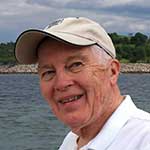 MELROSE — Robert A. Griffin, 88, a longtime resident of Melrose, passed away peacefully at Brooksby Village in Peabody on Wednesday, Oct. 5.

Robert was born in Winchester on June 28, 1928, one of five children of the late Norman B. and Helen V. (Kiernan) Griffin. He was raised and educated in Melrose, graduating from Melrose High School. He continued his education at Carnegie Mellon University in Pittsburgh where he received a degree in Business Administration.

Bob was a longtime member of the First Congregational Church in Melrose where he met his wife Claire Noren at the young adult group. They were married on Sept. 12, 1953 and raised their three children in Melrose.

Bob was blessed with a sharp and analytical mind. Born into a family of typesetters, he served as president of the family business, Monotype Composition Co. in Boston. Founded in 1911 by Bob’s grandfather, the business operated successfully with the leadership of Bob and his sister, Ruth N. Clark, for many years. With his curious mind and love for learning new things, Bob was constantly adapting to new technology and continued to advance the business until its closing in 1996.

Mr. Griffin was an intelligent man who followed his own path. He had a passion for sailing, flying, gardening and singing. He sailed up and down the coast from Massachusetts to Maine, he knew every bay and island in between. As a licensed pilot, he enjoyed flying a Mooney single engine plane that he piloted out of Hansom Field. Closer to home in Melrose, Bob was a longtime tenor with the Polymnia Choral Society and held the position of in house graphic designer up until his passing. He was a founding member and served as treasurer of the a capella ensemble, Blue of a Kind, and sang in the choir at First Congregational Church.

Bob enjoyed a good story and, in his younger days, had a penchant for mischief. Throughout life, he enjoyed navigating the new road, always taking the scenic route when presented with the option.

With his curious mind and background in typesetting, he was always ready to build, rebuild or take anything apart. He built speakers, enjoyed woodworking and was eager to try anything for the first time. Above all, Bob was a devoted family man, who was forever protective of his wife Claire, and loving to his children and grandchildren. He enjoyed every moment he spent at family gatherings and watching as his grandchildren grew. He will be lovingly remembered.

Relatives and friends gathered in honor and remembrance of Bob’s life during visiting hours at the Robinson Funeral Home, 809 Main St., Melrose on Sunday, Oct. 9, from 2-6 p.m., and for his funeral service at the First Congregational Church, 121 West Foster St., Melrose on Monday celebrated at 9 a.m.

Donations in memory of Bob may be made to the First Congregational Church, 121 West Foster St., Melrose MA 02176.