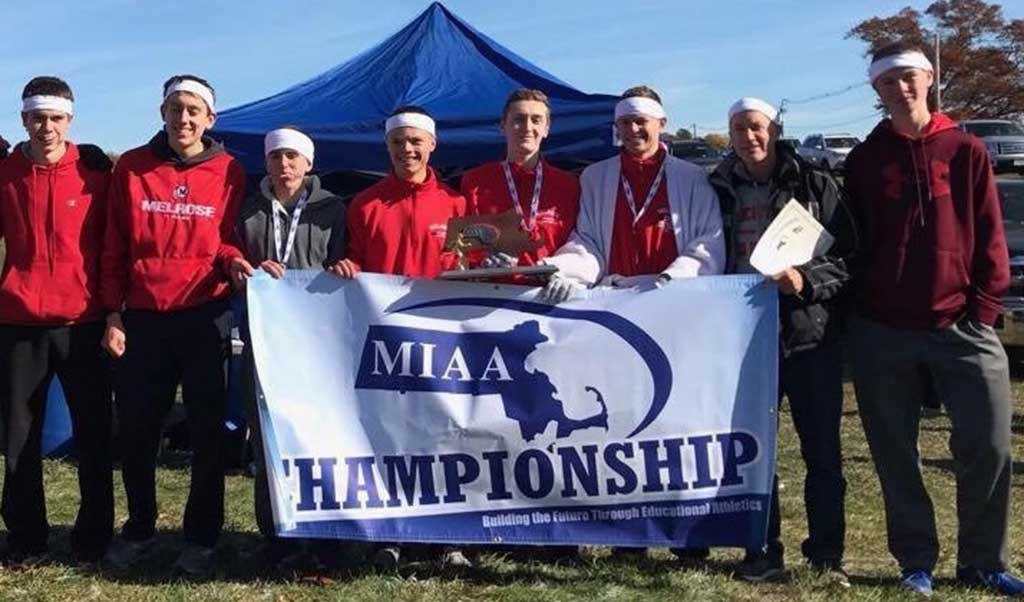 IT WAS another remarkable season for the 2016 MHS Cross Country team, who placed 4th in the state on Sunday at the MIAA All States Meet and saw their top runner, Adam Cook, become state bronze medalist. (courtesy photo)

Special to the Melrose Weekly

GARDNER — Melrose High School cross country head coach Kevin Allison has waited for a chance to brag about his team’s accomplishments at the State level. After back-to-back team finishes in the top five of the Division 2 race, he may have found his talking point.

The Red Raiders traveled to the hilly Gardner Municipal Golf Course on Nov. 19 in what turned out to be a surprisingly humid afternoon. They followed up a second place finish in 2015 at the Eastern Massachusetts meet with an impressive fourth place finish with 184 points, narrowly missing third place by only 6 points.

Senior captain Adam Cook made his case for best runner in Melrose history, running the race of his life. Cook finished in third place with a time of 16:29, a mere nine seconds behind Newburyport’s Jack Carleo to become state bronze medalist. It was the second straight year that Melrose had a runner in the top three, with Kevin Wheelock finishing third last year in Westfield.

“I don’t know if I ever saw an athlete put more of an effort into a competition that Adam Cook did in this race,” said coach Allison. “Adam probably took an hour after the race to recover from his phenomenal effort. It was a fantastic way for him to finish his storied cross-country career.”

Wheelock, also a senior captain, missed some time with injuries this season but was healthy enough to run last Saturday. He finished 24th with a time of 17:13. Fellow senior captain Sean Conlan finished directly behind Wheelock, crossing the finish line at 17:14 to keep Melrose in the hunt.

Junior Steve Stromski was the fourth runner to finish from Melrose with a time of 18:12, a 47 second improvement from his previous race in Gardner. Will Hanlon finished off the scoring for Melrose, finishing in 18:37 to grab 87 points for Melrose. Dan Broderick had a time of 19:15, while Griffin Barriss finished his MIAA career with a time of 19:31.

The season is not over for Melrose. This Saturday, they travel to Poughkeepsie, N.Y. for the Nike Eastern Regional Meet, the first time the team will travel outside of Massachusetts for a meet. The race will cap off what has been an outstanding four years for the Class of 2017.

Cook, Conlan and Barriss arrived in 2013 with sky-high expectations. From 2013-2016, the team went 26-2 in the regular season with two league titles, and a win streak that reached 22 straight meets at one point. The team made the All-State meet in all four seasons.

In 2013 the team reached new levels, with captain Christian Gentile leading them to a 6-1 record that resulted in the team competing in Gardner at the All-State Meet. Gentile finished in 10th place at the 2012 State Meet and with a more complete team that included freshman Cook and Conlan he was the catalyst behind an 18th place finish at the 2013 All-State Meet.

In 2014, the team went undefeated when they added Kevin Wheelock, who quickly transformed into the team’s top runner. They made yet another trip to the All-State Meet, improving to 14th place with senior’s Duncan Locke, Abraham Zimmerman, Ian Brophy making key contributions.

2015 was perhaps the most successful season in program history. An undefeated regular season was a fitting way to end Robbie Hanlon’s fantastic career that included four years of varsity. His younger brother Will broke onto the scene as well as fellow sophomore Steve Stromski. The team finished second place at the All-State’s, with Wheelock (#3 in the state), Cook, Hanlon, Conlan, and Barriss scoring high for the Red Raiders.

In 2017 Melrose will lose four of their top seven runners.

Allison spoke proudly of his seniors, “It is amazing to watch these boys performing at such a high level for so long. They really are something else to watch. I am going to miss them next year.”

Melrose will rely on Steve Stromski, Will Hanlon, Dan Broderick, Liam Gray and Kyle Thompson to continue the unprecedented run of success for the program.