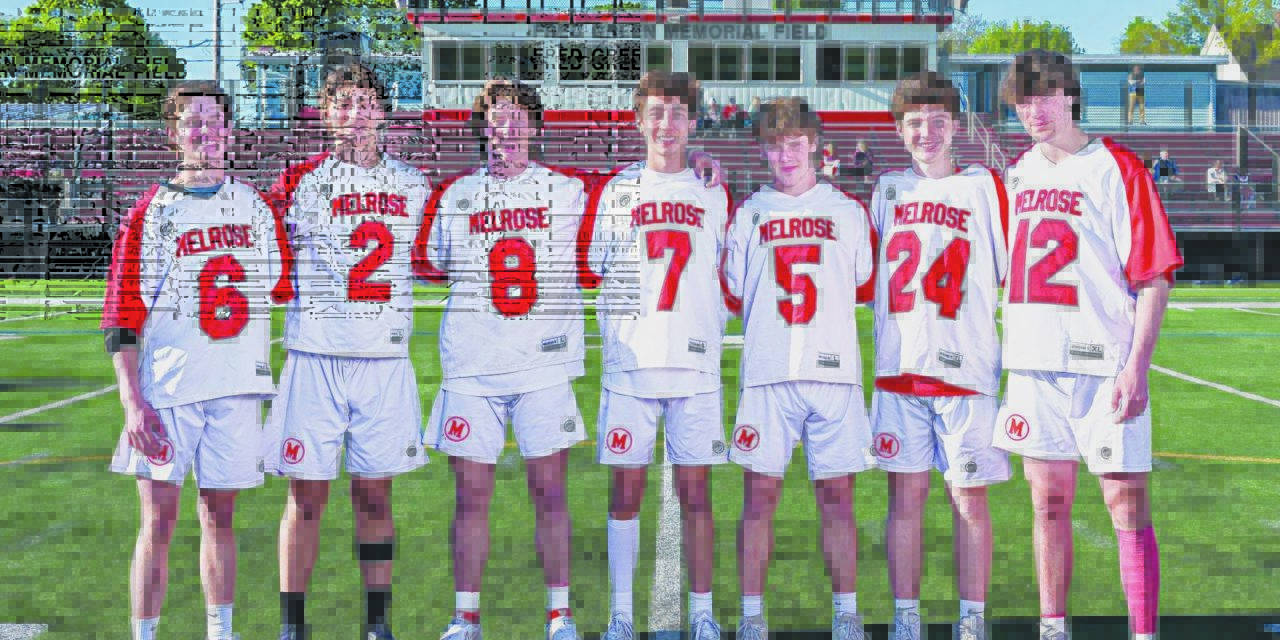 MELROSE—The Melrose High boy’s lacrosse team is hitting their stride as they round out the final stretch of their regular season. Melrose picked up two Middlesex League wins over Arlington and a Burlington, a 10-9 barn burner that has helped Melrose reach 7-7 on season with four games left to go.

Melrose is poised for a post season appearance, not just by record but impressive power rankings that see Melrose power rated at #19, and could go up as they close out their regular season on May 31 against Austin Prep. Melrose could theoretically go 10-7 or 11-7 entering Div. 2 playoffs.

“We’ve had a very strong schedule, the toughest yet and I think that shows in the rankings. We hope to go up in rankings on the next released ones,” says Melrose head coach Matt James.

Burlington, a team Melrose will only face once in the regular season, had been on a calendar as a must-see event. The two rivals have a competitive rivalry and that was evident from first whistle as the Red Devils (7-7) opened strong and put Melrose down 3-0 early in the game.

“Burlington is such a well coached team, and they always finish. We expected they would battle the entire game with us and that it would be a close one,” says James.

But Melrose got on the scoreboard first when senior captain Shea Fogarty found the net to make it a 3-1. And senior Brady Pitcher would connect with junior Steven Fogarty, who scored Melrose’s second goal. And Melrose would tie it up on a buzzer beater at the end of the first on a nice shot by Max Kleinbub which had their many fans cheering as the tide officially turned in Melrose’s favor.

Melrose scored furiously in the second quarter, prompted by strong face off work. After Shea Fogarty found the net for Melrose, Brady Pitcher was on a roll with two straight goals to lift Melrose 6-4, with help from an assist by Steven Fogarty. Melrose held a 7-4 lead going into halftime. Melrose expanded on that with consecutive goals from Brady Pitcher (3 goals) and Liam Maher (2 goals) to take a wide 9-5 lead in the third but Burlington came to life in the third and trimmed that lead 9-7 going into the fourth.

Melrose goalie Michael Fuccione and the team’s defense came up big in the fourth, particularly in the waning minutes of the game when Melrose saw Burlington tie it up 9-9 with minutes to go. Fuccione had a beautiful save that was a sure-goal by Red Devil attacker and with just 2:57 left, senior TJ Sullivan ran the length of the field past defenders to get the ball into the hands of Liam Maher who hit the ultimate game winner 10-9 Melrose.

Coach James’ team would put on a furious defensive stand in the final minute with a key save by Fuccione and strong defensive work from Dan Dussault, Colin Fahey, Steve Fogarty and TJ Sullivan to help protect the net and prevent a tying goal.

The victory comes on the heels of a larger 15-3 over Arlington.

Melrose will look to finish up the Freedom League with wins when they take on Wilmington and Stoneham this week (post deadline) and will hope to make playoffs official in the coming week.