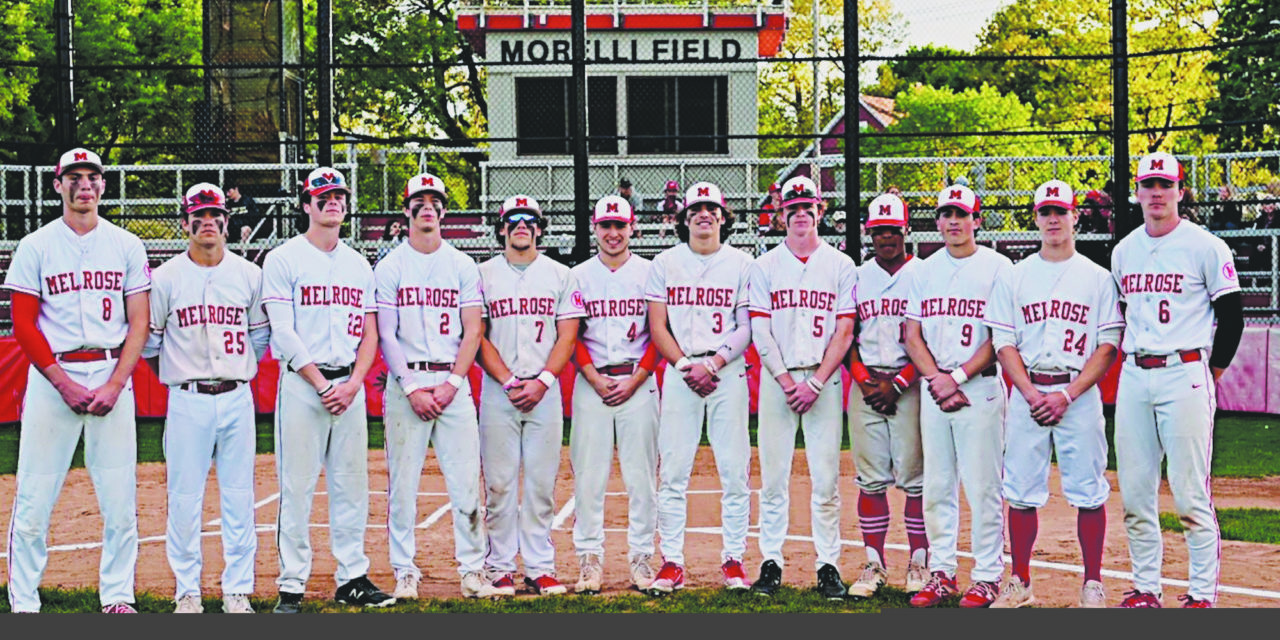 Drago throws a gem in 10-4 victory

MELROSE—The Melrose High School varsity baseball team took home a 10-4 win over Wilmington on Senior Night on Tuesday, May 17 at Morelli Field. This after qualifying for a post season thanks to a four-game winning streak, capped off with Tuesday’s victory over the Wildcats. Melrose (12-7) has punched their ticket to a post season Div. 2 playoff run later this month.

It was a special night as Melrose honored their seniors for their commitment to their respective program, but Wilmington looked to spoil it as they jumped out to an early 1-0 lead in the first inning.

Melrose senior Dom Drago and the Wilmington hurler were dueling for much of the early innings as both teams could not get much offense going, but a quick surge in the bottom of the fourth gave Melrose the spark they needed. It was Melrose’s Rob Colozzo who broke the silence for the team on the scoreboard as a single to left would score Malcolm Whitfield and Rowan Smith to give Melrose a 2-1 lead.

Drago and Melrose would make quick work of Wilmington defensively to get right back up to back to explode for a six-run inning. A pair of singles from Dom Lamentea and Drew Harrington would kick things off in the fifth, and Trevor Botto would knock in Lamentea with an opposite field single to right putting the score at 3-1. Later in the inning, Smith contributed two more runs to the scoreboard, and Colozzo continued his strong performance with another RBI knocking in Whitfield making the game 6-1. A Lamentea double would cap off an electrifying inning for Melrose as two more runs crossed the plate making the contest 8-1 after five.

Melrose got to enjoy their lead and honor some of their seniors as Tom Foley, Zach Federico, and Andrew Izzi all got a taste of the action in the sixth inning. A Foley double electrified the Melrose bleachers and more cheers soon came after Federico drove him in making that the ninth run of the game for the Red Hawks. Izzi also contributed a single of his own, while Smith and Michael Richards also singled loading the bases for Colozzo. Colozzo would give Melrose their tenth run of the game by knocking in Izzy with a sac fly making the score 10-1.

Dom Drago had been dominant for most of the evening, but faced some Wilmington resilience as they scored three runs in the final inning making the game a respectable 10-4 contest. Nonetheless, Drago was still brilliant in his outing only allowing one run over seven innings while tallying seven strikeouts to aid Melrose to an enjoyable win on Senior Day.

Melrose will wrap up their regular season on Thursday (post deadline) and will enjoy a lengthy break from games before playoffs start at the end of the month.