Melrose rolls past Malden at home, 38-0 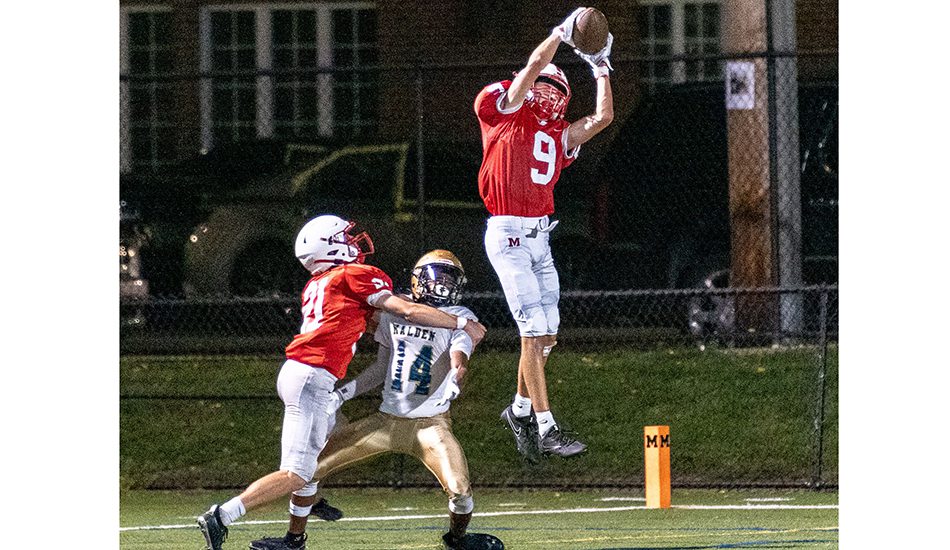 MELROSE—Fresh off what head coach Tim Morris described as the team’s best week of practice of the season, the Melrose Red Raiders (1-2) picked up their first win of the fall in dominant fashion on Friday, September 24, cruising past Malden 38-0 at Fred Green Memorial Field.

“Even though we were in two very physical games against two very good teams, and we’ve been banged up with a lot of kids hurt and injured, I thought it was still one of our best weeks of practice,” said Melrose head coach Tim Morris, when asked whether there was a heightened sense of urgency among the team coming into last Friday’s contest.

Melrose was the first to strike in the contest when Shea Fogarty took a handoff from quarterback Trevor Botto and rushed into the end zone from about Malden’s four-yard line, helping make the score 7-0, Melrose, at the 1:46 mark in the first quarter.

Malden was unable to answer on its next drive, and after the Golden Tornados were forced to punt, Melrose opened the floodgates. When a holding penalty on Melrose brought back a long gain on a Liam Maher catch-and-run, the Red Raiders went right back to Maher on an end-around the very next play, bringing the ball to Malden’s nineteen yard line.

Trevor Botto capped off the drive when he rolled right out of the pocket and fired a pass to Brady Pitcher in the end zone on the far side. Melrose then faked the PAT, having Botto pretend to take the snap and then roll right to hit an all-alone Liam Maher in the end zone in nearly the same exact spot as Pitcher, making the score 15-0 Melrose.

Backed deep in its own territory, Malden was forced to punt on its next possession, but a high snap forced the Golden Tornados to take a safety, making the score 17-0. Melrose. On the ensuing kickoff, junior Oto Albanese notched a strong return to set up Melrose with good field position at Malden’s thirty-two yard line.

Strong play from underclassmen would be a theme for the Red Raiders all night. Oto Albanese would later rumble his way for another stellar return to open the third quarter, fighting through a horse-collar and multiple Malden arm tackles to set up Melrose at Malden’s forty-one. Junior Stephen Fogarty scampered for several strong runs and even a score in the fourth quarter, in addition to making a couple hits on defense. Junior cornerback Trentyn Hodges broke up a downfield heave in a one-on-one matchup during Malden’s possession following the Botto-to-Pitcher score.

“That’s where we are right now,” said Morris when asked about the contributions of the underclassmen. “We have a team where everybody’s got to contribute…that’s expected. The more reps they get, the better they’re going to be.”

Following the safety and Albanese’s return to Malden’s thirty-two, Melrose attacked the Malden defense with a dose of quarterback keeps from Botto and hard runs from Shea Fogarty, with Botto eventually finding the end zone on a keep from about Malden’s three yard line. On the last play of the half, Malden attempted a thirty-five yard field goal that was no good, and Melrose rolled into halftime leading 24-0.

The Red Raiders did not relent in the second half. Set up by Albanese’s rumbling return, Melrose commenced to shave almost six minutes off the clock with its opening drive of the half. Facing fourth down inside Malden’s five yard line, Trevor Botto kept the ball for himself and breezed into the endzone, helping make the score 31-0.

Malden continued to face a stifling Melrose defense that refused to yield ground. The defensive line was anchored by senior Zach Federico and junior Ian Gauch all night, while Rowan Smith and Shea Fogarty stepped up to make multiple tackles from the linebacking corps and secondary, respectively. On a fourth down near midfield following Botto’s score to make it 31-0, defensive lineman Patrick Lucien showed good hustle in tracking down Malden’s quarterback for a sack, forcing a turnover on downs.

Melrose would go on to score once more after Botto’s tuck-and-run. With 6:44 left in the contest, Stephen Fogarty took a handoff from quarterback Josh Madden near the goal line and punched it in, making the score 38-0 Melrose. The final score would remain that way.

Melrose will look to carry the momentum of its first win into the team’s away game this Friday, October 1, at Wilmington, which will mark the beginning of league play. An early start time of 6:00 p.m. is on tap at Wilmington High.