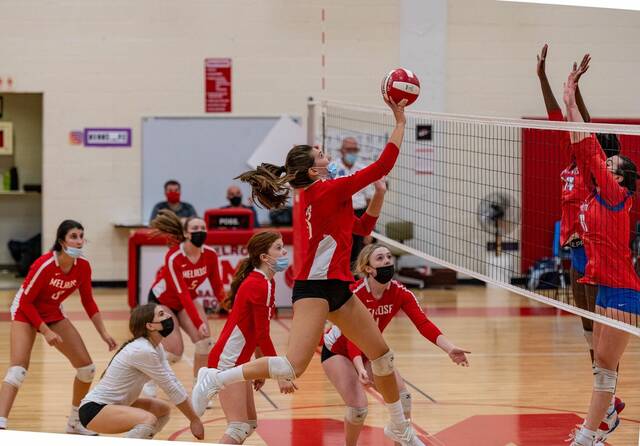 MELROSE—The Melrose High girl’s volleyball team is locked and loaded at 16-2 and ready for playoffs as they close out their regular season this evening with a home finale against Central Catholic. It’s must-see viewing for Melrose fans with action taking place just prior to the Red Raider football team at the high school. Melrose (14-1, league) will start at 5:30 p.m.

Meanwhile, all eyes are on seedings that will be released on Monday which will determine Melrose’s fate in the Div. 2 fold. Unlike previous years, Melrose will not be vying for a D2 North crown (which they’d be a heavy favorite for) instead they will be pooled together with thirty-two division 2 teams from across the state who are power-ranked high enough for post season consideration. It’s a new system for the MIAA and will essentially see broadened competition and further travel for MIAA teams.

Melrose is currently ranked #3 in Div. 2 behind Westboro and Hopkinton, though that could change. The Red Raiders are likely going to be a top seed with a bye and home court advantage for a few rounds, meaning there will be plenty more volleyball for local fans to enjoy. It will take five games to reach the state final.

Melrose had a busy week starting on Thursday, Oct. 21 when they traveled to face Wakefield for the second time of the season. Melrose won in sets 25-12, 25-23, 26-24, but it wasn’t always pretty. Two of the three sets were pushed close to 25 but Melrose prevailed thanks in part to come-from-behind serving from senior captain Abby Hudson, back in the fold after a mid season injury, and senior hitter Ava Burns. Both helped flip a 23-20 deficit to a 26-24 win, which Hudson sealed on a service point. Hudson’s serving also saved Melrose in set two, when Melrose faced a 23-21 deficit and her three straight service points and aces closed the door. Offensively, Melrose was led by Elena Soukos with 12 kills.

“It’s been great having Abby back,” says Melrose coach Scott Celli. “She’s a weapon on the outside and we’re going to see a lot more of her up front and serving.”

Melrose had a super competitive win against Frontier at home on Saturday. The longtime non-league rival is a standout Div. 5 favorite and strong in every facet of the game. Sure enough, they pushed Melrose in sets of 25-20, 28-26, 25-17 to an eventual 3-0 Melrose sweep. The Red Raiders were in fact lights out good in the first set behind the hitting of Elena Soukos (11) and Sadie Jaggers (7). Junior captain Chloe Gentile pounded away to help Melrose take leads of 14-11 and 20-16 for the eventual 25-20 win. Melrose also benefitted from solid serving from Ava Burns. Said Celli, “I thought Ava Burns is doing a nice job shining through on the right side. She brings a great energy to the court that’s infectious.”

Set three was a barn burner that stretched out 28-26 despite Melrose taking an early lead of 5-2 behind two straight kills from Chloe Gentile. An Elena Soukos ace on the service line followed by a Sadie Jaggers kill closed the door, 28-26. Melrose had an easier time in set three, taking a lead of 7-2 behind the work of Sadie Jaggers and in later parts of the set, Chloe Gentile. The combined hitting finished the job and Melrose took the win, 3-0.

After the game Celli tipped his cap to both his own team and Frontier. “I thought Frontier was our best effort start to finish. We put them on the schedule for a reason before playoffs.”

Unfortunately, Melrose lost their first league game of the season with a 3-2 loss to Burlington (12-4) at home on Monday. Despite great hitting from Elena Soukos (16 kills) and Chloe Gentile (12 kills) and solid hitting from Sadie Jaggers and Ava Burns, Melrose lost their footing after going up 2-0 in sets. The result was an underwhelming 3-2 final that won’t effect Melrose’s league title but has spurred ideas of change in the coach’s head. “We may have been a little complacent,” Celli said of their efforts, particularly against Burlington. “We played great in set one but were having trouble communicating defensively in our back row and let the game get away from us. Burlington deserved that win. They dominated the last three sets and took the momentum.”

One thing the team is focusing on is closing the door earlier and not letting teams linger. With that in mind, look for some changes on the floor. Confirms Celli, “It’s easy to kind of go along with the idea that if something isn’t broken, you don’t fix it. Well, we know that something hasn’t been working, and now we’re going to fix it.”

Seedings are expected Monday. Melrose will likely maintain one of the top seeds in a wide Div. 2 field, considered possibly the toughest in the state. Until then, it’s one game at a time, cautions Celli.

“We have much to work on because we want to go deep into November.” 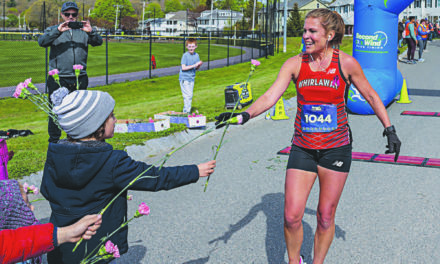