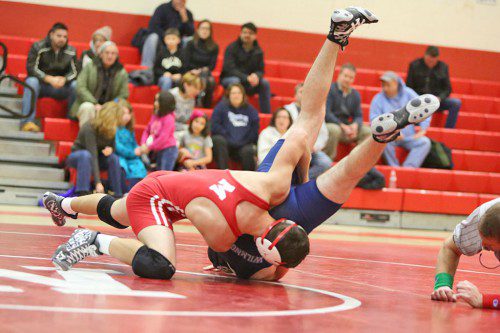 THE MELROSE Red Raider wrestling team had a strong showing in the 2015 Middlesex League Meet with a 4th place finish among 11 teams. (Donna Larsson photo)

MELROSE — The Melrose Red Raider wrestling team hosted the Middlesex League on Saturday, Jan. 31 at the Marcoux Gym at Melrose High School for the 2015 Middlesex League Invitational League Meet. It was the perfect audience to witness Melrose senior Mike Doucette get crowned league champ in the 182 weight class.

Doucette earned pins over John Mullen of Lexington, Matt Yirrell of Wakefield and silver medalist Liam Fagan of Arlington for a clean 3-0 sweep in the 182 weight class.

Overall, Melrose took a fourth place finish at 113 points behind Arlington, Winchester and Reading; fourth of 11 teams which marked a huge improvement for the Raiders from last season.

Another Raider who had a big day was Patrick Whelan, who went 4-1 and earned a bronze medal after a 6-3 decision over Jim Welch of Burlington. After falling to a Winchester opponent he took pins over Miles Herbert of Woburn, John Cables of Lexington and Farid Mawanda of Watertown. His 4-1 performance was good enough for a spot on the podium.

In the heavyweight class, Melrose’s Nick Disley went 2-2, pinning Alec Campbell of Watertown before falling to the eventual champ Matt Ferraro of Reading. In the consolation round Disley pinned Caleb Bausman and fell to Mike Lima of Wakefield for an overall fourth place finish.

Melrose wrestled with 11 athletes including those mentioned above and Mandip Singh, Cam Rosie, Mike Calvert, Cam DiBiccardi and Jessie Gauvain.

The Raiders finish their regular dual meet season with a finale against Wakefield on Thursday, Feb. 6 at Wakefield High before hosting Woburn on Feb. 11 at 7 p.m. On Feb. 14 Melrose will compete in the Division 3 North Sectionals at North Reading High School at 8 a.m.