Melrose volleyball to spike for glory in 2014 campaign 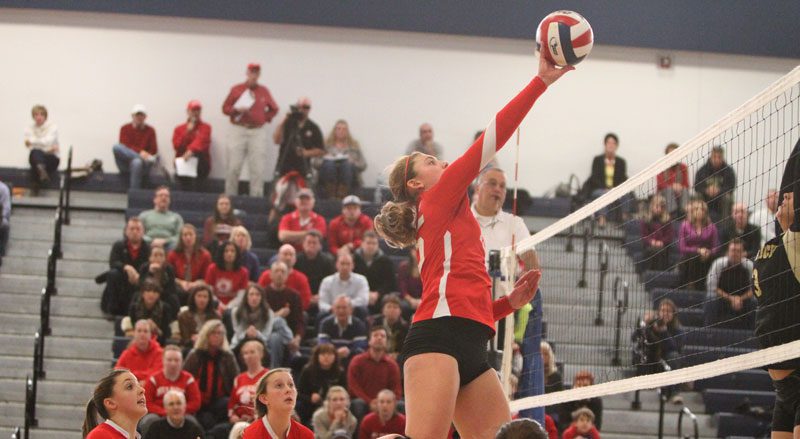 MELROSE — After a 21-3 season and their 11th straight Div. 2 North sectional appearance, the Melrose Lady Raider volleyball team returns to the 2014 fall season looking to inch closer to another run at the state title. The 2012 Div. 2 State Champs return packed with power ready to assume a role of league and division favorites.
“This will be a good season,” predicts Melrose head coach Scott Celli. “We hope to compete for a state title, definitely earn a sectional title. We have a lot of talent coming back and, if we execute correctly, we will be tough to beat.”
Melrose lost five seniors to graduation in 2013, including their All Scholastic, League MVP libero Jill MacInnes, but coach Scott Celli’s Lady Raiders return with most of their offensive power and a roster with starters who average height stands about 5’9”.
Suiting up for the Lady Raiders are outside hitter Marissa Cataldo, senior setter Allie Nolan, defensive specialist Amanda Cain, middle hitters Hannah Mulcahey and Meri Lessing, seniors Ashley Harding and Stephanie Crovo and outside hitter Cat Torpey. New this season are freshman Lily Fitzgerald, Bella Federico, junior Meghan Leyne and sophomore Kaitlyn MacInnes.
Serving as captains this season are Nolan, the team’s stalwart setter, attacker Merri Lessing, who led the Lady Raiders with 246 kills last season, and sophomore Victoria Crovo, a promising athlete second in kills in 2013 with 161. Filling in libero duties is senior Amanda Cain, who Celli describes as the team’s best defensive player.
In a recent pre-season scrimmage against North Andover, the Lady Raiders showed plenty of finesse in their win, with exceptional serving across the board and solid front row hitting from Lessing, Cataldo, Victoria Crovo and Mulcahey. Blocks at net were performed admirably by Stephanie Crovo, Allie Nolan, Cat Torpey and Hannah Mulcahey.
The roster is a fairly trim one at 13, with the Lady Raiders open to calling up players over the season. With much talent vying for top spots, getting the nod as a varsity starter is competitive to say the least. When asked what he looks for in a varsity player coach Celli explains the criteria. “The questions I ask … can you play the game? Is the player smart on the court and able to handle both offense and defense? Are they able to work the system?”
Last year Melrose fell only twice in regular season with losses against Bishop Fenwick and Newton North, two teams who went deep in playoffs. While Fenwick unseated Melrose last year to become Div. 2 North Champs they have lost three of their top hitters in 2014, giving Melrose a slight edge in pairing.
Across the Middlesex League, the Lady Raiders will have to keep their eye on Burlington, who finished 11-3 last year right under Melrose, though the Red Devils are rebuilding and have lost powerhouse Maya Russell. Lexington should also prove competitive in the Middlesex Liberty league.
Melrose once again boasts a tremendously tough schedule with contests planned against Newton North, Central Catholic, Westborough and state champion Notre Dame of Hingham throughout the season.
Newton North is the first marquee event of the regular season taking place at home on Thursday, Sept. 11 at 6:30 p.m. at the Melrose Veterans Memorial Middle School gym. The Lady Raiders have fallen just short against the perennial Division 1 favorites in recent non-league match ups but the contests are always must-see events.
Overall, it should be a season of excitement for this recharged Melrose volleyball team. “If we can play with no uncertainty and execute our game we can beat anyone,” says Celli. “We don’t fear anyone on our schedule.”