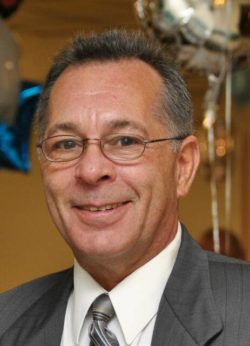 MILTON — James “Jimmy” Robert McCarthy, 67, passed away at Season’s Hospice in Milton on October 21, 2021 from a long battle with cancer.

Jimmy was born in Melrose on February 13, 1954. He was raised in Melrose and graduated from Melrose High School in 1972. Shortly after graduation, he worked at The Boston and Maine Railroad, as a lead machinist and was the president of the local 318 Boston Union. In 1988, he became a property manager at Diversified Funding, and in 1999 he joined the Boston Housing Authority managing elderly Housing. He was admired by the elderly community. He held similar roles at several other companies prior to retiring in 2017.

Jimmy was an amazing cook and loved cooking for his family and friends. He also enjoyed fishing, playing 45’s and darts, and watching local Boston sports teams. He is the son of Jeanette (Ciulla) McCarthy of Melrose and his late father Gerald McCarthy. Husband of Ann-Marie (Dodge) McCarthy. Father of Jennifer Rappoli and her husband, Ryan, of Tewksbury; Daniel McCarthy and his wife, Lindsay, of Melrose; Chelsie Codair and her husband, Andrew, of Hampton, NH; Megan McCarthy and Chris McCarthy both of Portsmouth, NH. Grandfather of Derek, Gianna, Evelyn, Allison and Jeremy. Brother of Joe McCarthy of FL, George McCarthy of Melrose, Jeanette Johnson of Wilmington, Irene Murphy of Shrewsbury and Geraldine Dale of North Reading. Also survived by many family members, nieces, nephews and friends.

Visitation will be held at the Gately Funeral Home, 79 West Foster St. Melrose, on Thursday, October 28 from 9 – 11 a.m., followed by a service at 11 a.m. Interment to follow at Wyoming Cemetery in Melrose. Relatives and friends are respectfully invited to attend. In lieu of flowers memorial contributions may be made in Jim’s name to a charity of one’s choice. To send a message of condolence please visit www.gatelyfh.com.