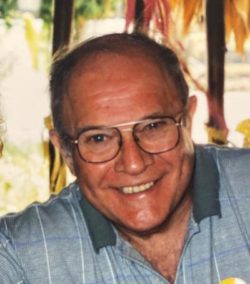 A loving and friendly person with a big personality

Gil was born on February 6, 1934 in Providence, Rhode Island. He was the younger of two sons of the late John R. (Ray) and Florence (Masterson) Gauch. He grew up in Warwick, Rhode Island and graduated from Lockwood High School in 1952. He enjoyed playing several sports as well as being involved in many other activities while he was in school. He went on to attend the University of Rhode Island where he played football and was a member of the Tau Kappa Epsilon fraternity. He graduated in 1956 with a bachelor’s degree in Business Administration and Marketing.

After college, Gil enlisted in the United States Navy, serving until 1959. After his time in the service, Gil went to work for Armstrong Cork Company as a salesman. He then worked in Boston as a stockbroker and financial adviser until his retirement. Gil enjoyed his work and the many lasting friendships he made during his career.

Gil met and later married his beloved Sherron Sanders on January 29, 1966 at Trinity Church in Copley Square. They eventually settled in Melrose in 1972 and enjoyed their life there. He spent time remodeling their home to make it a welcoming place where family, neighbors and friends gathered often, whether for holiday celebrations or just for good company.

Gil was a devoted member of Trinity Church in Melrose, holding several positions within the church over many years, helping to make several updates and improvements.

Gil was a loving, friendly, and warm person with a big personality and an easy smile. He will be missed by all who were blessed to know him. Making friends came easily to Gil. He had a way of making anyone he met feel good about themselves. He loved getting to know people and never shied away from a lively discussion about the issues of the day. He loved sports and he especially loved the New England Patriots. An avid fan since the seventies, he defended his fandom over many difficult seasons, often saying “no matter what, you’ve got to support your home team.”

Gil also enjoyed weekends and vacation time with family and friends at their cottage on Belleau Lake in New Hampshire, where they made many lasting memories. In later years, he enjoyed going with Sherry on many cruises, both to enjoy time on the ship as well as to travel to new places and meet new people.

Gil was the beloved husband of Sherron (Sanders) Gauch with whom he shared 56 years of marriage. Devoted father of Payton Wilkins and her husband, Brendan, of Leominster; and Garrick “Gary” Gauch and his wife, Sheilah (McCarthy), of Melrose. Loving brother of the late John (Jack) Gauch. Beloved grandfather of Brendan, Lauren, Abigail, and Ian, and great grandfather of Rhys.

Relatives and friends are invited to gather for visiting hours at the Robinson Funeral Home, 809 Main St., Melrose on Friday, Jan 21 from 4-7 p.m. Masks are required. Funeral services will be private. Interment in Wyoming Cemetery, Melrose.

Contributions in Gil’s memory may be made to the Cystic Fibrosis Foundation Massachusetts/Rhode Island Chapter, 220 N. Main St., #104, Natick, MA. 01760.