Merchants done in by Melrose in eight innings 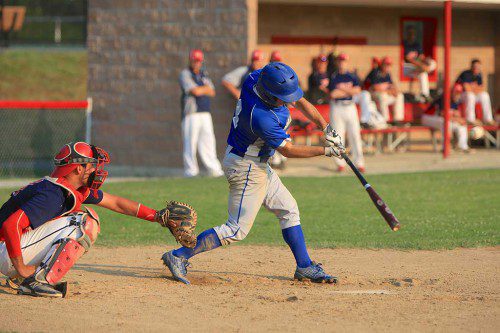 LOUIS TARANTINO had two hits, scored a run and drove in a run as the Wakefield Merchants dropped a 6-4 game to the Melrose Americans last night at Walsh Field. (Donna Larsson Photo)

WAKEFIELD — On Wednesday the Wakefield Merchants played host to the Melrose Americans in Intercity League baseball action at Walsh Field. It was a tight contest all the way through and even went into an extra inning with Melrose coming out on top 6-4 in the end.

Both teams have been scuffling for form as of late with Melrose losers of four its last five games dating back to July 10 prior to last night and Wakefield having not won since the last time these teams met on July 8 with four losses coming prior to last night’s setback.

On Wednesday, Darren Bisso got the start on the hill for the Merchants. He tossed two scoreless innings before being replaced by Kyle McCarthy.

Bisso was opposed by Melrose’s Shawn Smeglin. The right-hander picked up the win pitching into the eighth inning.

The Merchants jumped out to an early lead scoring a run in each of the first two innings, holding a 2-0 after two innings.

With a 1-0 lead, John Davison led the second off with a base hit to right. After a one out walk moved Davison into scoring position, he came around on a Lou Tarantino RBI single.

Melrose came back and touched up McCarthy for a run in his first inning of work to cut the lead in half at 2-1.

McCarthy’s first batter, Anthony Licciardello led off the Melrose half of the third inning with a base hit. Austin Masel followed with a single of his own and there were two on and nobody out. The bases were loaded after a walk to Tom Petry and Melrose was on the board following a sacrifice fly to center by Isaiah Berg.

McCarthy got the next batter to bounce a ball to first where Davison attempted to start the double play but only managed to cut down the runner at second base. McCarthy struck out Mike Eqitto to end the threat with minimal damage.

Wakefield went quietly in its half of the third and neither team scored a run in the fourth inning.

Melrose managed to tie the game at 2-2 in the top of the fifth. Masel led the inning off with a triple to deep left. Masel scored when Petry hit a ground ball to second base that got through and Petry went up to second base on the throw home.

A sac-bunt moved Petry along to third and he came in to score and give Melrose the lead on a Mike Addesa RBI single to left.

Mike Sorrentino worked a walk to lead off the bottom half of the fifth for the Merchants. Jake O’Rourke rolled one down to third base and beat the throw to first reaching safely. Ever the smart baserunner, Sorrentino was digging hard from the crack of the bat. He didn’t break stride around second and slid safely into third to put the pressure squarely on Smeglin’s shoulders.

The next batter, Mark Poli, skied a sac fly to right to score Sorrentino and tie the game at three runs apiece.

Melrose threatened in the sixth with a one out single by Dan Cacciola, but he was stranded at second base when McCarthy got Masel to fly out to center to end the inning.

Wakefield went in order in its half of the sixth, but some (very small) fireworks led off the inning. With the game tied, Davison rolled a ball off the end of the bat down the first base line. The ball appeared to kick foul and die just short of the base but the home plate ump determined it had stopped in fair territory and called Davison out when the first baseman stepped on the base. After a very mild protest and the proclamation that the call was ‘awful’ Davison was ejected from the game.

Some fresh lines on the field could have averted this situation as Manager Dave Ellegood was still searching for an explanation for the ejection after the game saying, “He didn’t say anything, and the ball never reached the base.”

Both teams failed to score in the seventh inning, so it would take an extra frame to determine a winner.

Ellegood called on Sam McCarthy to pitch the eighth inning. He surrendered a leadoff walk to Eqitto but, after getting Zeke Berg to pop back to the mound, Melrose had three consecutive men reach base. First a walk to Andre Gaudet made it first and second with one out before Cacciola and Licciardello singled to knock in runs to give Melrose a three-run lead, 6-3.

In the bottom of the eighth Smeglin got O’Rourke to fly out to lead off the inning but an error at third base and a walk forced Manager Kevin Burgoyne to make a call to the bullpen. Kyle Autilio got the call and was greeted by McCarthy with an RBI single with the runners advancing to second and third on the throw home. Wakefield had a chance with the tying run on second base but a pair of weak fly balls to right field ended the threat and the game ended 6-4 in favor of Melrose.

Both teams head to Arlington for their next game against the last place Trojans. Wakefield gets a crack at breaking its losing streak on Friday, while Melrose looks to make it two in a row on Sunday.

“We’re scuffling right now,” Ellegood said. “These teams we have to beat if we’re going to compete in this league. We’re just not doing it. (In the) Bottom seventh, if we score one run there the game is over. We had our 1-2-3 hitters up. You gotta win the game there, so we don’t deserve it.

“In the first few innings we left runners on base, we had the bases loaded with one out, second and third with one out, this game should have been 6, 7-1 going into the third or fourth, but we’re not getting the clutch hitting.”

What Ellegood has seen this year has been nothing short of disappointing,

“We just don’t have the guns this year,” lamented Ellegood as his team wasn’t exactly what he was expecting this season. “A couple of guys were supposed to be with us this year and just couldn’t commit. We’ve got eight games to go, we’re just going to grind it out. Maybe we can play spoiler to a couple teams.”