Merchants running out of chances 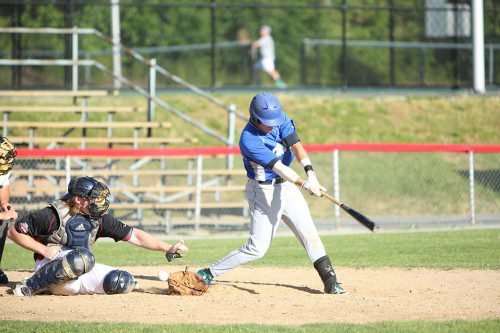 WAKEFIELD — The Wakefield Merchants played their fourth game in four nights and posted a 1-3 record during that span as they desperately need points to move into sixth place and gain a playoff berth as the top six teams in the Intercity League make the postseason.

The Merchants came close once again last night but were edged by the Melrose Americans by a 4-3 score at Walsh Field.

Wakefield fell to 7-17-1 in the ICL standings and remained in seventh place. The Merchants are one point behind the Somerville Royals who are 8-16-0 on the season. Wakefield has three more games remaining on the schedule with one more against the Americans on the road and home contests against the first place Andre Chiefs and third place Lexington Blue Sox.

Melrose, meanwhile, increased its record to 10-14-1 and is in fifth place five points ahead of Somerville.

The Americans plated single runs in the first, second and third innings to open up a 3-0 lead. Wakefield got one back in the fourth before Melrose tallied its final run in the top of the sixth inning. The Merchants rallied for two runs in the home half of the sixth to cut the lead to one run but that was as close as they got.

Veteran right-hander Darren Bisso (0-1) pitched the first two innings and took the loss. Bisso gave up two runs on four hits while walking three and striking out one.

Christian Rosati (3-3) hurled seven innings giving up three runs on nine hits while striking out six batters and walking no one.

The Merchants outhit the Americans, 9-8, but Melrose was ahead where it counted the most on the scoreboard.

Jake O’Rourke led the way offensively for Wakefield with three hits while Joe Barry had two hits including a double. Louis Tarantino, Scott Searles, Mike Sorrentino and Chris Butler all had one hit for the Merchants.

O’Rouke scored two runs, while Butler was the other Wakefield player to cross the plate. Butler, Mark Poli and Barry drove in the three runs.

The Melrose Americans had eight hits with John Jennings, Nick Herzog and Dave Center all having two hits. Mike Addesa and Dan Cacciola both had one hit. Center had the lone extra base hit for the Americans with a double.

Petry walked twice, while Masel, Addessa, Herzog, Kevin Kelley and Mike Eqitto each drew one free pass. Masel and Cacciola each stole a base as well.

The Merchants host the Andre Chiefs on Sunday at 4 p.m. at Walsh Field before facing the Melrose Americans again on Tuesday, Aug. 2 at 7:30 p.m. at Morelli Field. Wakefield closes out the regular season on Wednesday, Aug. 3 at 6 p.m. against the Lexington Blue Sox at Walsh Field.

The Melrose Americans host the Somerville Royals on Sunday at 4:30 p.m. at Morelli Field and then host the Merchants on Tuesday, Aug. 2. On Thursday, Aug. 4 the Americans play the Royals at 8:15 p.m. at Trum Field in Somerville to close out their regular season schedule.