Merchants stuck in neutral against the Watertown Reds

Wakefield swept in doubleheader, has lost five in a row 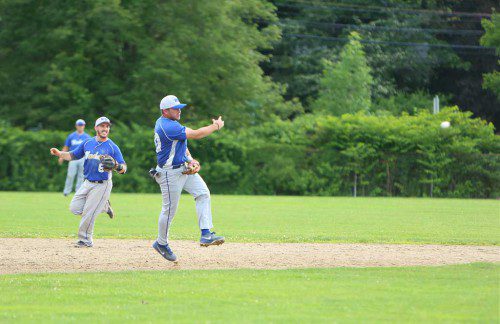 SCOTT SEARLES (right) had a great day at the plate in Wakefield’s doubleheader against the Watertown Reds at Walsh Field. Searles had two hits and a double in each of the two games. He also scored a run for the Merchants in the second game. (Donna Larsson File Photo)

WAKEFIELD — The up and down season continued for the Wakefield Merchants yesterday afternoon and evening as they were swept in a doubleheader at Walsh Field to be handed their fourth and fifth straight defeats.

The Merchants dropped two games against the Watertown Reds by scores of 9-1 and 5-2 in Intercity League play to fall to 7-12-1 in the ICL standings and remain in fifth place.

Watertown, meanwhile, upped its record to 15-6-0 and is currently in third place in the ICL standings.

The Reds offense was firing on all cylinders in the afternoon game as they banged out 16 hits and tallied nine runs against three Wakefield hurlers. Meanwhile, Wakefield was held to one run on six hits as clutch hits eluded the Merchants.

Jarrod Marchesi (1-3) pitched the first three innings and was reached for five runs on eight hits. The right-hander walked two batters and struck out one batter.

Christian Ferlan pitched the sixth and seventh innings and gave up one run (unearned) on two hits while striking out a batter and walking a batter.

Wakefield had six hits with Scott Searles leading the way with two. One of Searles’ hits was a double.

James Ramsey, John Davison, Mike Manoogian and Louis Tarantino each had one hit. Manoogian scored the lone run and Joe Barry drove in the lone run.

Mike Sorrentino and BJ Neil drew the two walks surrendered by the Reds.

The batting and pitching stats for the Watertown Reds were unavailable.

The second game of the doubleheader was more competitive but a four-run second for Watertown proved to be the difference. The Reds added one more run in the fourth inning. The Merchants, meanwhile, scored single runs in the first and fourth innings.

Kyle McCarthy (2-2) went the distance for Wakefield giving up five runs on nine hits. The right-hander struck out four and walked two. He had one bad inning where Watertown scored four runs. Other than that, he kept the Reds in check.

The Merchants scored two runs on seven hits. Searles once again led the way with two hits including a double. He also scored one of the two Wakefield runs.

Sorrentino, Manoogian, Barry, Neil and Tarantino each had a hit as well. Manoogian also had a double and scored a run.

Driving in the two runs were Ramsey and Neil.

The batting and pitching stats for the Reds were unavailable.

Wakefield will look to snap its losing streak when it faces the Reds again on Wednesday night at 6 p.m. at Bentley University. Wednesday’s game starts a road trip of three games with stops in Arlington on Friday night at 7 p.m. at Summer Street Field and in Beverly to take on the Reading Bulldogs on Sunday at 1:30 p.m. at Endicott College as well.

The Merchants next home game is Sunday night at 5 p.m. at Walsh Field when they host the Andre Chiefs.