Attorney with National Labor Relations Board 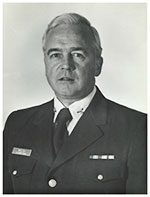 MELROSE — Michael Francis Walsh, 85, of Melrose, passed away suddenly on Jan. 23 after a period of illness.

Born in Somerville to John and Margaret (Dunleavy) Walsh in 1929, Michael had made a home in Melrose for over 50 years.

Michael graduated from Saint Clement High School in Medford, Boston College and Boston College Law School. He worked as an attorney for the National Labor Relations Board for over 25 years, retiring as the Regional Attorney for Region 1-Boston. After retiring from the NLRB, Michael worked right up until his illness as a labor arbitrator, mediating disputes between employers and unions through the American Arbitration Association.

Michael was a proud recipient of the Cushing-Gavin Award from the Labor Guild of the Archdiocese of Boston.

Michael served his country with distinction for over 20 years in the United States Coast Guard and Coast Guard Reserve, retiring with the rank of Captain.

Michael enjoyed playing handball at the Cambridge YMCA, making many friends over the years. He also enjoyed his weekly round of golf with his brother Jack and their friends.

Michael enjoyed traveling with his wife Doreen and always looked forward to his weeks in Aruba and summers on Cape Cod with his wife and children.

To Michael, faith, family and friends meant everything and Saint Mary of the Annunciation Parish in Melrose held a special place in his heart and soul for over 50 years.

Michael was predeceased by his sister, Catherine (Sis) Donnelly. He leaves his brother, John (Jack) Walsh and his wife Marie of Medford and brother Joseph of Lexington. He also leaves a sister, Anne Gaudette and her husband, William, of Hummelstown, Pa. He was the brother-in-law of Thomas Donnelly of Woburn, Margaret Moriarty of New Hampshire, Margaret Sheehan of Milton and Eileen Charron of Georgia. Michael leaves many nieces, nephews and cousins both here and in Ireland.

The funeral will be held from the Gately Funeral Home, 79 West Foster St., Melrose, on Friday, Jan. 30, at 10:30 a.m., followed by a Mass of Christian Burial at Saint Mary Church, Herbert Street, Melrose at 11:30 a.m. Relative and friends are respectfully invited to attend. Interment with Military Honors will follow at Wyoming Cemetery in Melrose. Calling hours were on Thursday, Jan. 29, from 4 to 8 p.m.

In lieu of flowers, memorial contributions may be made to Saint Mary Parish Building Fund, 4 Myrtle St., Melrose MA 02176 or Saint Anselm College at https://alumni.anselm.edu/giving. To send a message of condolence please visit www.gatelyfh.com.