Mike Boyages receives a bon voyage from his peers 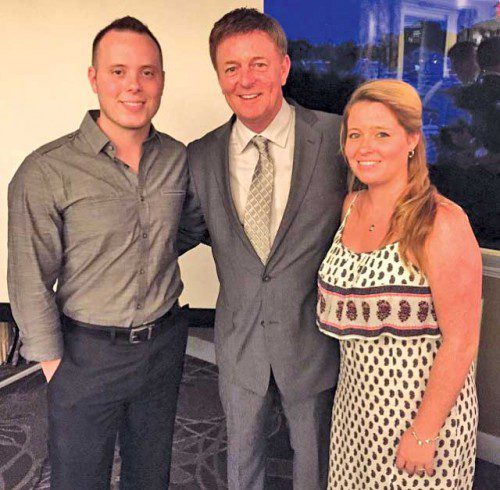 MIKE BOYAGES (center) is pictured with his son, Zack (left) and daughter, Caitlin (right), at his recent retirement party held at the Danversport Yacht Club.

DANVERS — When the new school year begins in September, there will be a presence that will be missed in the athletic department and out on the fields at Wakefield Memorial High School and even throughout the entire Wakefield Public School system.

That’s because Director of Athletics, Wellness, and Student Activities Mike Boyages has retired after 36 years of dedicated service in the Wakefield schools as an A.D. and coach at the high school and physical education teacher at the Galvin Middle School.

Boyages, a Wakefield native, is a 1976 graduate of Wakefield High School and was a star athlete while at Wakefield having been the quarterback on the football team. He was also a member on the basketball team and was also active in baseball as well.

About 82 people, give or take a few, attended Boyages’ retirement party on Wednesday, June 24 at the Danversport Yacht Club.

After the cocktail hour at 5:30 p.m., the guest of honor and attendees sat down for a buffet dinner. After the dinner, coffee and desert, the retirement ceremony got underway.

John Amentola, a former assistant football coach with Boyages, was the Master of Ceremonies and he greeted all the guests. He went on to speak about Boyages, made a few jokes and then “wished Mike the best”.

Lahiff has known Boyages for many years and both attended Springfield College together. That led to a few jokes about Mike’s golf game and how quiet he was about it as he made some terrific shots.

Lahiff also had a photo of Boyages playing basketball with a picture of LeBron James pasted onto what was the photo of the former Wakefield High graduate playing at Springfield College.

Lahiff also joked about when it was time for the M.L. athletic directors to represent a sport, Boyages always chose girls’ gymnastics since it was the shortest sports season.

The Watertown A.D. then reminisced about their time at Springfield College during the Blizzard of 1978. That led to a picture of Clydesdales bring Budweiser beer to the dorm through the snow.

She spoke about the success of the football program beating some Div. 1 schools and about how the Warriors handled themselves with class despite winning or losing. Smith mentioned that Boyages, though his dedication to the Wakefield school system and coaching, was able to shape the boys that played football into fine young men.

“In my 30 years, Mike Boyages is the epitome of an ethical educator,” said Smith. “Thank you. I love you and congratulations.”

Lane recalled when he coached a young Boyages at WMHS. He recalled a state tournament game from Boyages’ junior year. Wakefield played Melrose at a neutral site in Braintree. Lane recalled that the traffic was tough and the team didn’t arrive until 6:45 p.m., 15 minutes before tip-off.

He remembered that Wakefield was down by 18 points to the Red Raiders at halftime. The Warriors were able to come back and win the game due to the fine defensive effort by Boyages on Melrose’s top player. Lane mentioned that Boyages’ defense helped them win that game and that the newly retired A.D. could dribble, pass and shoot the ball well.

Lane also recalled a moment from when he was the freshman football coach and a young QB named Mike Boyages wanted to fake the handoff on a sweep and keep the ball himself when Wakefield needed about 12-13 yards for a first down against Watertown. Not only did Boyages move the chains but he broke a touchdown run between 75-80 yards.

“It was like having another coach,” said Lane. “He went on to do a fantastic job (coaching). He not only taught them young men how to play sports but he also taught them to be good citizens.”

Lane then went on to refer to Boyages’ golf ability and how there would be handicaps the next time he played with Boyages, his father Zach, and his brother Rick.

The last thing Lane said was, “Mike, enjoy your retirement.”

The final presentation was made by Paul Uva. Uva is a WMHS wellness teacher and former WMHS varsity football offensive coordinator.

Uva mentioned first how fast time went by and he begin working in the Wakefield school system in 1985. That’s when he became friends with Mike Boyages. He mentioned that Boyages always went the extra mile for the students and student athletes.

The former Warrior assistant coach also remembers when Boyages became the head coach in 1997 when there was a lot of division in the town after the popular Ray Boghos was not rehired as head coach. Uva said that many of the players at the time asked Boyages to put in his application to be the head coach because they didn’t want an outsider to come in as the new head coach.

“He did the right thing for the kids,” said Uva, who coached for 10 years with Boyages and was part of three of Wakefield’s Super Bowl finalist teams with the 1999 team winning it all.

Uva even referred to the coin flip tiebreaker in ‘99 at Melrose High the day after Thanksgiving when the two teams played to a 14-14 tie. Uva pointed out the dignity which Boyages handled the situation the coin landed on tails and Wakefield had won the right to go to the Super Bowl. Boyages felt bad for the Melrose team and knew it could have easily been the Warriors on the losing end. Wakefield even wore Melrose stickers on their helmets in the Div. 2 Super Bowl game to show a sign of respect for its arch rival.

The last person to speak was the guest of honor, Mike Boyages.

Boyages said that preparing his speech for his retirement was worse than preparing for any football game, regular season, Thanksgiving or playoff game. He said there were so many people he wanted to thank. He started with Amentola, the master of ceremonies

Since the theme of the retirement party was to honor Boyages and do so with several lighthearted mixed in with some serious sentiment, the guest of honor did the same thing.

He said that most people asked him why he was retiring now. Taking a page from the retired David Letterman, there was a top of 11 reasons why Boyages was retiring and each reason was presented by 11 different guests at the retirement party.

Assistant WMHS Principal Dennis O’Leary said that Boyages had lost it and started calling him coach.

Kristine Collins, the WMHS Athletic Secretary, said that she really got Boyages fired by the administration when they realized she was the real athletic director at Wakefield Memorial High.

Assistant football coach and track coach Ruben Reinoso said Boyages was retiring because of him and some of the language he used on the football field.

Greg Gibbons, a strength and conditioning coach at WMHS for the track teams and a wellness teacher at WMHS, said that Boyages had lost it when he couldn’t distinguish between a PLC (Public Learning Community) and a WTF track and field sweatshirt.

Rich Metropolis, WMHS Principal, said that Boyages was retiring because he had no further interest in shoveling Landrigan Field for the Thanksgiving Day football game.

Lisa Silva, the JV girls basketball and JV softball coach and a wellness teacher at WMHS, said that Boyages is retiring because he doesn’t even know why he is here.

Amentola was next and he said that Boyages’ job was interfering with his trips to Foxwoods.

Uva then gave reason number eight saying that the rumors were true and Boyages had two more kids to support with his pension.

The ninth reason was given by Boyages’ son Zack. Zack, who lives with his father, said Mike needed to retire to do his laundry and fix his meals.

Perry Verge, a former assistant football coach and teacher, said Mike Boyages was retiring to go tanning with him and golf at the Winthrop Country Club.

The final reason was given by new Warrior head coach Steve Cummings. Cummings said that Boyages was retiring because he lost to Melrose three times last year.

When that was over, Boyages went on to thank his fellow A.D.s in attendance. He thanked Smith and Lane and then Uva.

He made a particular point to mention Janel Stevenson who worked with him at the Galvin Middle School for 10-15 years before he moved on to the high school.

“I don’t think Janel’s ever had a bad day,” said Boyages.

Boyages then went on to thank the coaching staff at WMHS in every sport. He also mentioned Roni Burns (retired Athletic Secretary) and former Superintendent of Schools Joan Landers for being supportive. Boyages also mentioned his friend Maureen Moro, his sister Lynda, and Collins.

Boyages made it a point to mention his two children, Zack and Caitlin. He also mentioned his father Zach, who was a rock to him and the entire family.

The night ended with Boyages thanking everyone in attendance.