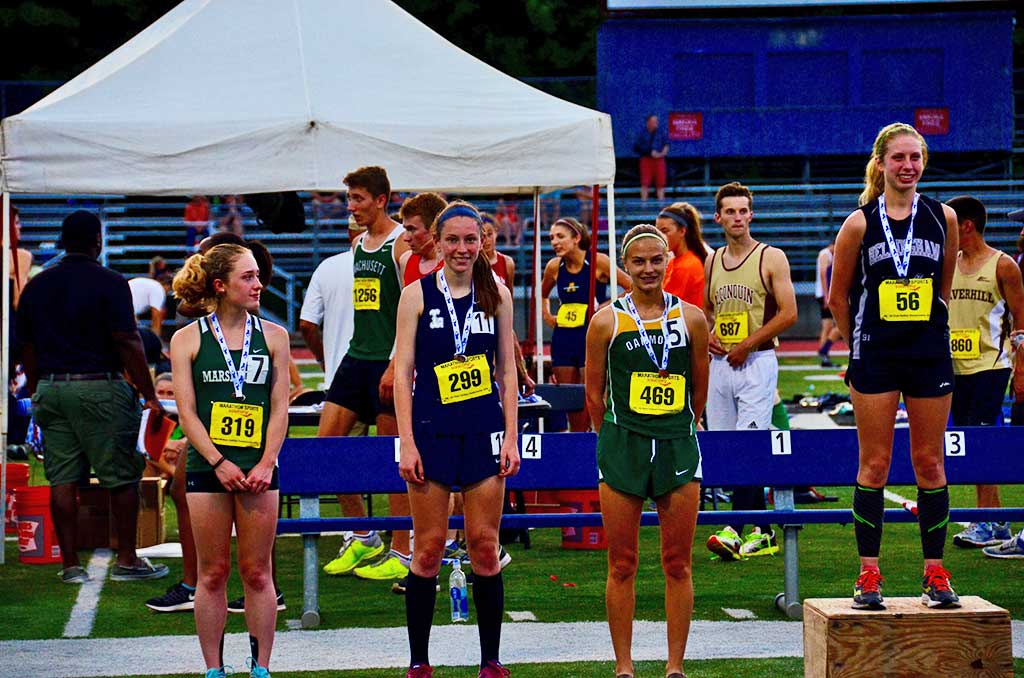 KATE MITCHELL (second from left) poses with her sixth-place medal in the 800m at last week’s All-State Meet. After breaking a 15-year-old school record to qualify for All-States, Mitchell bettered her own record by another three seconds (2:14.28) to qualify for both New Englands and Nationals.

She started off the state meet series on the right foot at the Div. 4 East state meet on May 28 in Norwell at which she finished tied for second place in a photo finish at 2:17.10, said her coach, Liane Cook.

“Kate had an unbelievable PR of more than two seconds,” an elated Cook said. Her time broke a school record, originally set 15 years ago by Kristen Bell, by 0.5 seconds, Cook said. Bell’s record time was 2:17.6.

In addition to breaking the school record, Mitchell’s time was fast enough to advance her to the All-State Meet where she competed with the top athletes in every division in the state. Westfield State hosted the All-State Meet on Saturday, June 4 and Mitchell turned in another stellar day.

“Kate ran another three-second personal record, set a new school record, qualified for New England’s next week with a sixth-place finish and qualified for Nationals with her time of 2:14.28,” reported Cook.

“Her efforts and work ethic and goal-oriented mindset all season, as well as targeted workouts these last few weeks really put her in a great position mentally and physically to run so well,” Cook believes.

After competing in the New England Championship Meet in New Britain, Conn. on Saturday, June 11, Mitchell is slated to travel to North Carolina to compete in the National High School Championships, which will be held from Friday, June 17 to Sunday, June 19.