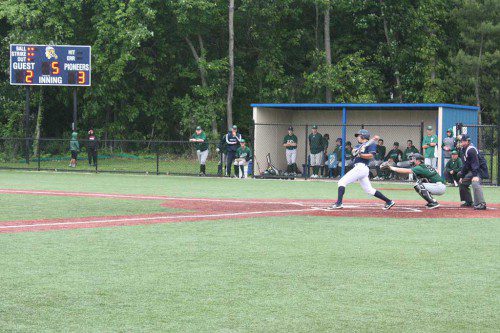 SWINGING for the fences. Senior Nick Theophiles blasted a homer on this shot against Pentucket to contribute to the team’s 6-5 win in the first round of the Div. 3 North tournament. (Maureen Doherty Photo)

LYNNFIELD — Sunday’s state tournament baseball game between the Pioneers and the Pentucket Sachems was as much of a battle with the forces of the weather as it was between two competitive clubs that had faced each other twice during the regular season.

The two teams traded leads throughout the game, but in the end, Lynnfield, the No. 3 seed in the Div. 3 North bracket, persevered over Pentucket, seeded 14th at 12-8, to pull off a victory by the narrowest of margins – 6-5.

The victory enabled Lynnfield to advance to the tournament quarterfinals, playing host to Boston Latin at home on Monday with just 24 hours rest.

They prevailed once again, plating six runs while holding Latin to just one.

Lynnfield will now compete in the sectional semifinals on Thursday, June 9 at 7 p.m. at Endicott College in Beverly, a neutral site. Their opponent will be the winner of Tuesday night’s game between Austin Prep and Swampscott (played after press time).

The winner of this game will advance to the championship round of the North Sectionals against the winner of the North Reading-East Boston match-up being played at 4 p.m. today (Wednesday) at Fraser Field in Lynn. The location, date and time of the D-3 North Finals game will be announced on www.miaa.net, but it is typically played on a Saturday. 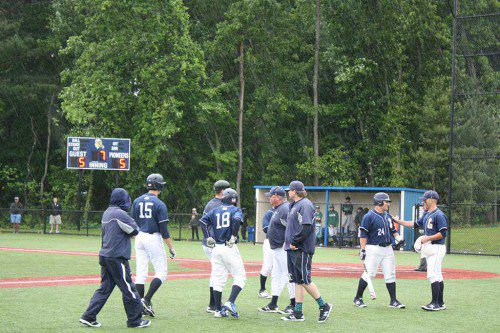 PIONEERS GATHER with their coach, John O’Brien (center), as an unrelenting downpour caused a rain delay to be called by the umpires in the bottom of the seventh with the score knotted at 5-5 in Sunday’s Div. 3 North first round tournament game against Pentucket. (Maureen Doherty Photo)

Sunday’s game against Pentucket was a true nail-biter. Lynnfield trailed 5-4 in the bottom of the seventh, but worked hard to get the bases loaded as the rain came down even harder.

Pentucket’s pitcher walked the tying run home. With no outs, and the winning run on third base, the umpires called a rain delay.

If the game had been called off completely, the teams would have had to return to the field on Monday at that same point in the game, with the momentum lost.

“After we spoke about what we wanted to do with the coaches and the kids, we left them alone and you could hear the seniors and the captains all saying, ‘We’ve come back all year; let’s go. Let’s have good at-bats,’” recalled Pioneer Coach John O’Brien. “Our biggest thing is we don’t want to waste at-bats, that’s huge for us, and today we did not.”

Lynnfield remained loose in the dugout, with the players dancing to such oldies as “It’s Raining Men,” and remaining hopeful to get back onto the field.

Less than 10 minutes later, the players were back on the field, although the conditions really had not improved by much.

Third baseman Mike Stellato would take the last at-bat of the game. O’Brien explained, “In the last at-bat, we just wanted to make sure that (Mike) got a good pitch to hit. We didn’t want him to chase the ball. He fouled one off, then he took that deuce early and then he put down the ball and it made its way through” for the base hit.

Stellato beat the throw to first as Nick Colucci raced home from third to cross the plate and break the 5-5 tie for the walk-off victory and the celebration began.

“It was a tough loss for them,” O’Brien said. “The conditions were great in the beginning and they deteriorated on both sides, moreso in the last inning for (Pentucket coach Tom L’Italien). He’s a very good friend of mine, terrific coach (and) runs a great program. Those kids play hard. They came back on us all three games. It’s a credit to them.”

Earlier in the seventh, when Lynnfield needed a strong bunter, O’Brien made a call to put in a freshman pinch hitter for a senior who had been having a great game at the plate. O’Brien said Nick Theophiles, who had had two base hits plus an out of the park home run in this game, in addition to making a couple of clutch catches, could not have been more gracious about this decision.

“It was in our mind that we wanted to bunt and he’s a little bit better bunter,” O’Brien said of his freshman, Jonathan Luders, whose first varsity at-bat will forever be remembered as taking place at a crucial moment in a state tournament series.

“And to his credit, (Theophiles) said, ‘coach, no problem.’ He was going to go right back in the game anyway if we didn’t score or if we tied it up. He had a hell of a day. He had two base hits and a couple of great catches in right field” in addition to his home run. O’Brien added, “He’s a great kid. That ball he hit – that was a smash – in this weather for that ball to get out of here? He did a great job today.”

“The freshman had never been in a varsity at-bat. (He had) a lot of poise to stay off lousy pitches and make sure he was bunting a strike and he did a nice job,” O’Brien said. Luders was patient enough to draw a walk.

Starting pitcher Nick Colucci threw for 6 2/3rd innings, demonstrating his resiliency as he “really hung in there” under tough conditions, O’Brien said. Reliever Nick Aslanian picked up the win, getting straight to business with his trademark efficiency.

“The first (Sachems) pitcher threw strikes. We knew he was going to. He liked to work low in the zone and we tried to stay on him and get some quality at-bats, and we did. But it was a close game; it could have gone either way. I don’t know what to say about the weather. We decided we wanted to play and at the very end it turned,” O’Brien said.

Once again, O’Brien gave a lot of credit to catcher Dan O’Leary.

“He threw that kid out early and that took them out of the run game. He’s really come along as a catcher. He calls every pitch. I don’t have anything to do with it and he runs the defense. He’s done a great job and he hit the ball hard today both times.”

With these two tournament victories, Lynnfield’s overall record has improved to 18-4.