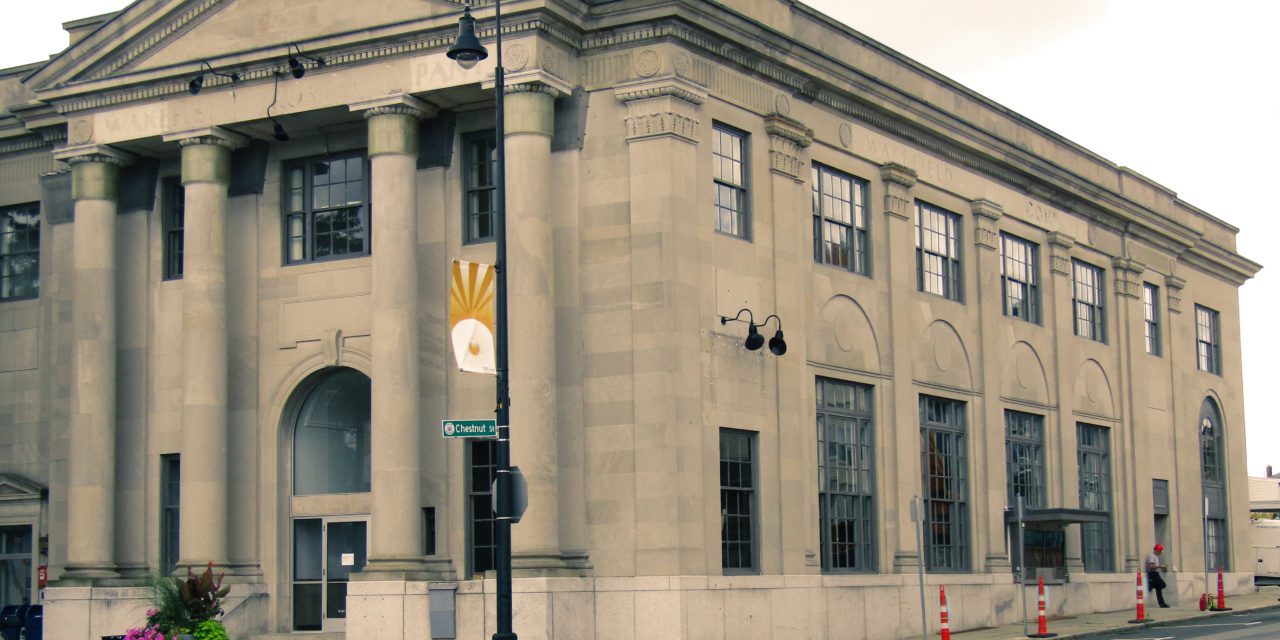 THE NEW OWNER of the former bank building at 369 Main Street would like to convert the currently vacant property into a mixed use with a restaurant on the first floor, offices above and 20 units of housing in a separate building in the rear. (Mark Sardella Photo)

WAKEFIELD — William J. Thibeault, the new owner of the former Santander Bank building at 369-371 Main St. in Wakefield Square, would like to make the property part of a new mixed-use development including a restaurant, offices and 20 residential apartments.

The Zoning Board of Appeals got its first look at Thibeault’s ideas for the property at their meeting this week.

Older residents will remember the signature downtown building as the former Wakefield Trust Company. The building was later the home of Fleet Bank and Shawmut Bank. Built in 1924, the building has long been considered a centerpiece of the downtown.

Among other zoning relief, Thibeault is seeking reductions in the requirements and/or standards for off street parking and loading as well as a Special Permit and site plan approval to allow a 20-unit mid-rise apartment building with a mix of other uses, including a restaurant and professional/business offices.

Representing Thibeault, attorney Brian McGrail appeared before the ZBA to introduce the proposed project. McBrail said that Thibeault recently purchased the property, including the building and the parking lot in the rear. He noted that some earlier potential buyers wanted to raze the bank building and put up something new. But Thibeault would like to save the building, McGrail said, and create a high-end restaurant on the first floor with offices above. A separate new four-story residential building with 20 two-bedroom units over ground-level parking would be constructed on the current parking lot behind the building.

McGrail showed the ZBA some images of previous projects that Thibeault has done. He said that Thibeault’s plan is to retain the entire new project after it is built, renting out the apartments and operating the restaurant himself.

Salvo noted that the property is currently almost entirely impervious surface. The proposed new building behind the former bank would have 28 ground-level parking spaces under three stories of wood-frame residential construction.

As proposed, the new building would have a cement base with cedar siding above. Some of the units would have balconies.

ZBA member Ami Wall observed that a lot of Thibeault’s previous projects have been in very urban areas of Boston. She wanted the developer to be mindful that Wakefield is a suburban town. She conceded that the proposed residential building looked nice, but said that she would prefer to see something that is more in keeping with the style of the existing bank building.

Board member Tom Lucey wanted to understand how the parking would work with the residential units and the office component.

ZBA member Michael Feeley said that the proposed project is “exacting what the downtown needs” in terms of populating the square with people and activity. But he questioned the proposed office use for the upper portion of the bank building, suggesting some kind of theatre or other cultural use might be more appropriate.

Appeals Board chairman David Hatfield said that he would also like to see the new residential building in the rear reflect more of the style of the original bank building.

ZBA member Greg McIntosh said that he, too, would like to see a different style building in the rear. Board member Jim McBain cited examples where proposed new buildings have been more in keeping with their surroundings.

Board member Chip Tarbell said that he wanted to understand how parking would work before discussing the style of the building. He and other board members expressed concern over the small number of parking spaces for the restaurant, offices and residential units.

McGrail noted that none of the downtown restaurants meet the parking requirement and most have no off-street parking at all. But he conceded that the initial proposal represented a work in progress.

“We have to start somewhere,” he said. He agreed that something with a cultural component might work in place of offices in the upper part of the old bank building.

Board members expressed surprise that there was no public comment on the proposal when the hearing was opened to the public.

The hearing was continued to the ZBA’s Sept. 14 meeting.