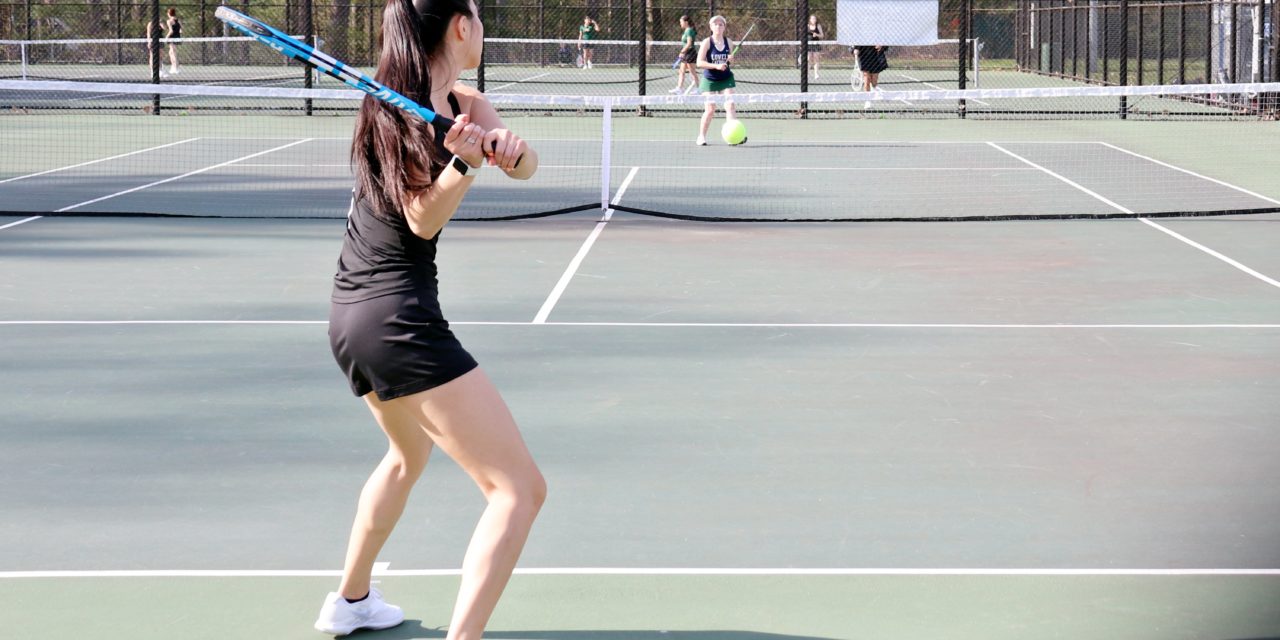 ELIZABETH GRANT lines up a shot against Lowell Catholic on May 5 at NRHS. (Courtesy Photo)

Juniors Chloe Florez and Katherine Hoadley played first doubles together for the first time and swept 6-3,6-0. Junior Mary Bonzagni and sophomore Bhagyavi Bandara received game balls as they both won their first varsity match in a three-set thriller 2-6, 6-1, 10-2.

On April 27, North Reading went up to Newburyport and lost to the loaded Clippers. Althea Bradley picked up the lone win at second singles in a sweep 6-1,6-1. Senior Captain Elizabeth Grant matched up against Nationally ranked Caroline Schulson and lost 6-0,6-0.

The Hornets hosted archrival Lynnfield and suffered a hard luck 3-2 defeat to the Division 3 powerhouse Pioneers on April 28.

After the doubles teams of Alyssa Bradley and Florez and senior captain Lexi Licciardi and Wright earned easy sweeps, it came down to the singles matches. 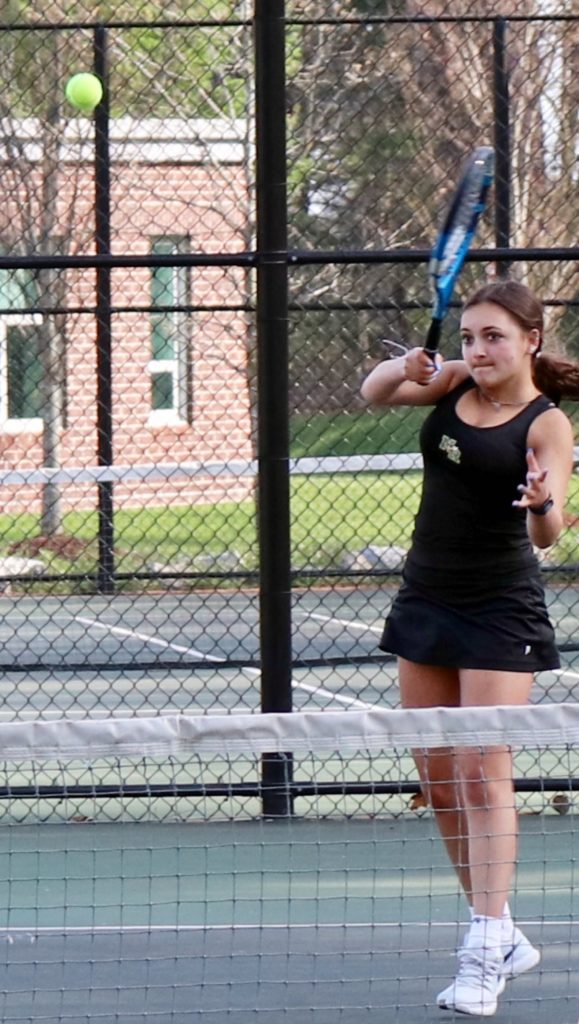 LEXI LICCIARDI fires one past a Lowell Catholic opponent on May 5 at NRHS. (Courtesy Photo)

“It was a good win as this team knocked us out of the D3 state tournament last June,” said head coach Matt Tiberii.

NR swept the singles to win the match. Grant was the first off, the court and only dropped one game 6-1,6-0. Althea Bradley picked up the second point winning 6-2,7-5. Campagna clinched the match with a 6-2,7-5 victory at third singles. Unfortunately, both doubles teams lost tough matchups.

On May 5, Lowell Catholic came to NR and the Hornets dominated the non-league matchup 5-0. NRHS cruised and only lost three games in their individual matchups. The main match of note was at second doubles where sophomore Isabelle Kim and freshman Aniya Teneja won their first varsity matches 6-1,6-0. They both were recognized after the match with game balls.

Amesbury came to town to play the Hornets on May 9. Senior Captain Elizabeth Grant sat this one out and freshman Althea Bradley stepped in and defeated her opponent 6-2,6-1 at first singles. Campagna and Alyssa Bradley won by identical 6-1,6-0 margins at second singles and third singles. Florez and junior Katherine Hoadley paired up for the second time this season and earned a 6-4, 6-2 W at first doubles. Licciardi and Wright won 6-2, 6-2 at second doubles.

The next day, Triton visited the Hornets. Grant and Althea Bradley won by carbon copies 6-0 6-0 at first and second singles. Florez and Bonzagni clinched the match at first doubles 6-3,6-0. Sophomore Vanessa Wright lost the first set 7-5 after being up 5-1, won the second set 6-1 and with the match already decided she won a third set 10-point tie breaker 10-6.

“It was a gutsy performance, and I was proud she hung on to win,” Tiberii said.

Licciardi teamed up with freshman Addison Stetson who was making her varsity debut at second doubles. They both played a tremendous match and the senior leadership of Licciardi carried them 5-7,7-5,10-8.

On May 11, the Hornets traveled to West Newbury to face Pentucket. Grant lost a close match with nemesis Parker Greason 7-5,6-4 at first singles. Althea Bradley won 6-0,6-1 at second singles. Campagna defeated her opponent 6-0,6-3. Florez and Wright teamed up and won at first doubles 6-2,6-4. Juniors Hoadley and Bonzagni played a great match together at second doubles and won 6-1,6-2.

On Thursday, the Hornets couldn’t avenge an early season loss to the superb Newburyport Clippers who came to town and blanked the Hornets 5-0. This was the fourth match in four days for the Hornets. Newburyport is currently ranked No. 1 in the latest MIAA Division 3 Power Rankings.

The Hornets had two wins over Rockport and Bishop Fenwick after press time this week, bringing their record to 12-4 on the season.