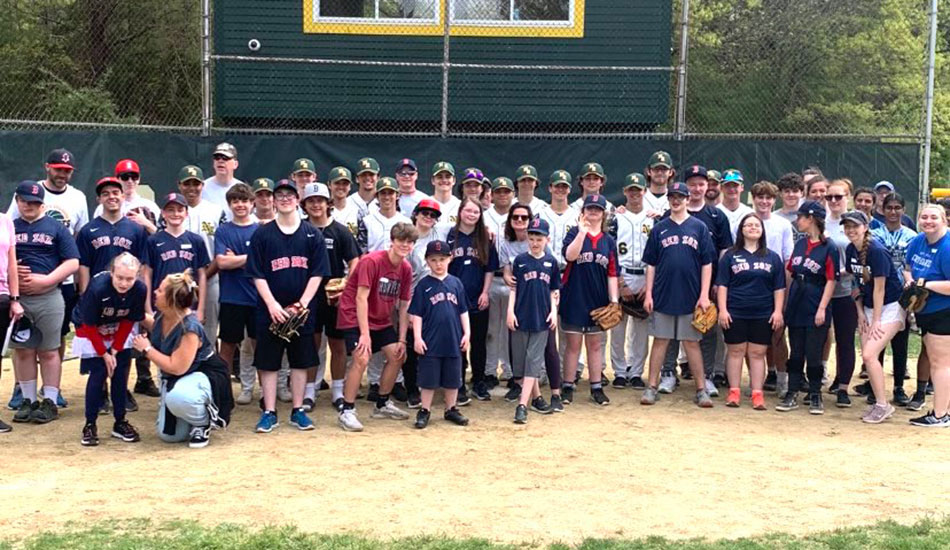 THE NRHS baseball team practiced with members of the North Reading Little League Challenger program over the weekend, an annual tradition that the varsity Hornets always consider to be their favorite day of the season. The 8-8 Hornets are ranked 32nd in the latest D3 power rankings but will likely need a couple more wins in their final five games to officially qualify for the state tournament. (NRHS Baseball Photo)

Baker was impressive, scattering three hits and striking out a half-dozen to record the club’s first shutout and split the season series with the Vikings.

With the pivotal win, North Reading improved to 8-7 overall and remained in a third place tie with Pentucket in the Cape Ann League (Kinney) at 5-6.

“We’ve come through a really rough patch of baseball,” said North Reading coach Eric Archambault, referring to consecutive losses to Newburyport, Amesbury and Hamilton-Wenham. “We faced some really tough teams and great competition and we really weren’t playing the way we were capable of. Today, we put it all together with good hitting, good base running, and phenomenal pitching.”

Baker set the tone early, retiring the top of the first frame on just five pitches. Exhibiting great control, throwing strikes and staying ahead of the hitters, Baker seldom faltered. When he did, the defense behind him was near-flawless. In the fifth-inning, for instance, Triton’s starting pitcher Griffin Dupuis led-off with a triple only to be later erased in a rundown race for home.

“I would totally agree,” said Baker when his effort was described as a career best, on a par with his triumph over Austin Prep in the 2021 playoffs. “We needed this win after three straight losses. I knew I had to come in and attack the strike zone and get outs. We preach in our pitching to stay ahead of hitters, get the first two strikes and hopefully get outs from there.”

Baker also contributed at the plate, driving in what later proved to be the game-winning run with a third-inning two-out double. Alex Carucci started the sequence, drilling a basehit and later advanced on a passed ball. Baker doubled-in Carucci for a 1-0 lead. Aldo Vittozzi followed with an RBI-double to thrill the North Reading faithful, gathered at Carey Field under early summer heat.

Triton, winners of three straight coming in, threatened in the fourth. Joseph Abt, the Vikings top athlete, was aboard with a one-out basehit and later moved to second when Tyler Egan worked Baker for a walk. But Abt was soon in the dugout, caught stealing with a surgical throw from catcher Carucci.

“People were playing some positions that haven’t played all year,” explained Archambault, when asked about the reinvigorated fielding. “They really stepped up defensively and it was awesome to see.”

North Reading added insurance in the fifth, scoring three runs on four hits. Craig Rubino flared a basehit and stole second. Carucci followed with his third hit of the game and also took second as Rubino advanced to third, setting the table with a pair of baserunners in scoring position. Triton lifted Dupuis in favor of reliever Cole Daniels but the damage was done. Baker’s basehit to short left scored Rubino. Ryan McCullough wrapped up the Hornets scoring, plating two more with an infield hit.

“We were struggling recently, missing some timely hits,” said Archambault. “Today, we were getting those two-out basehits that we needed, like Baker’s double early in the game that scored that first run.”

As the Hornets head into the home stretch of the regular season, Archambault seems upbeat about the club’s prospects, especially with Ryan Baker back to one hundred percent.

“He was battling a little arm issue early in the season so this was only his third start and only his second that we were willing to push him,” explained the coach. “When Ryan Baker is on the hill, the team behind him has a lot of confidence. He would have it no other way than to be on the mound and help right the ship heading into the final stretch.”

North Reading visited Pentucket Tuesday evening (results in after press time), travels to Rockport Thursday at 6:30 p.m., and will host Shawsheen in a rematch on Saturday morning at 10 a.m.