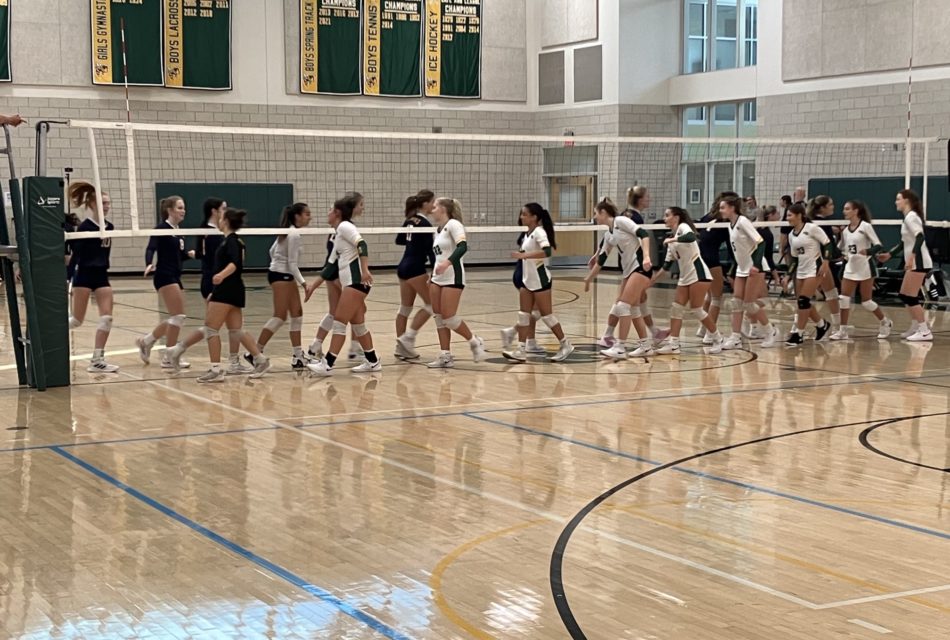 THE NRHS volleyball team shakes hands with Lynnfield on Sept. 14. The Hornets would go on to win back-to-back games against Swampscott and Georgetown. They travel to Newburyport today and host Essex Tech tomorrow at 5:30 p.m. (NRHS Athletics Photo)

GEORGETOWN — On Tuesday evening, the North Reading High volleyball team won their second match in a row as they blanked host Georgetown 3-0. The Hornets improved to 2-3 overall and 1-3 in the Cape Ann League with the victory.

“We played great,” said Hornets head coach Mike Milone. “We had some unforced errors in the opening set but cleaned that up in the final two.”

“We struggle sometimes with our serve-receive,” admitted Milone. “But I was pretty confident that we were going to win the match.”

Gerber had 15 assists and 11 kills to lead the team. Maddie Koenig had a team-high 17 digs and 10 service aces.

“They have a star player (Ella Gizmunt) who makes her teammates better,” pointed out Milone. “They have a strong team and it is between them and Ipswich for the league title.”

Gerber had four kills, while Madison Hopfer had four assists. Izzy Milone led the squad in digs with six.

North Reading next match is today (Sept. 22) as they visit Newburyport at 5:30 p.m. They then welcome Essex Tech the next day also at 5:30 p.m. for a non-league match.

The Hornets return to CAL action on Sept. 26 as they host Triton. Tw days later, they travel to Pentucket.

Both of those matches will also start at 5:30 p.m.