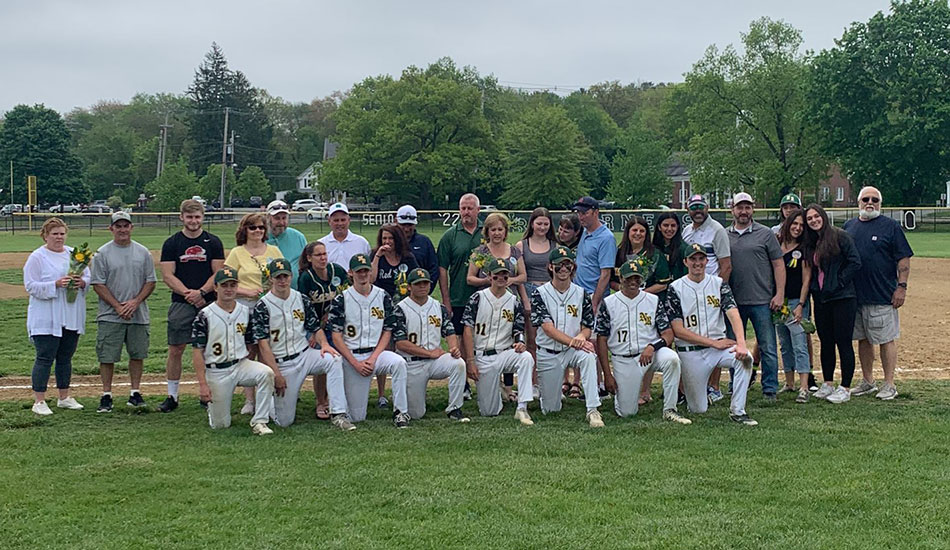 THE NRHS baseball seniors, who were honored on May 21 before a game against Shawsheen, helped lead the Hornets to a comeback 6-2 win over Lynnfield on Tuesday, clinching a spot in the Div. 3 state tournament. Pictured with their families from left to right are seniors Matt Ryan, Ryan McCullough, Tim McCarthy, Justin Bailey, Nicholas Doucette, Ryan Baker, Jack Fischer and Adam Bakr. (NRHS Baseball Photo)

LYNNFIELD — In a dramatic, come-from-behind 6-2 win over Lynnfield on Tuesday afternoon, the North Reading Hornets qualified for the 2022 MIAA baseball tournament, which will commence on June 3.

Trailing 1-0 through six innings, North Reading roared ahead in the seventh with a half-dozen runs to claim their tenth win of the season and earn a much-deserved playoff berth. Sparking the rally was Jack Fischer, who chopped a one-out bunt single to send home Ryan McCullough from third. It tied the game but the Hornets were just warming up.

“So I got the signal from coach to bunt and I was excited about it because I wanted to come through for the team,” said the senior third baseman. “To be in that position, to be able to get that hit, I couldn’t have been happier. We’ve had a lot of moments with Lynnfield throughout the years. It was great for our seniors to end the last game with them on a good note.”

Heading into the game, which was staged on the artificial carpet at Lynnfield High School, the Hornets were well aware that their host would pull out all the stops to slow their longtime rival’s drive to the post-season. For Lynnfield, playing the role of spoiler would counteract what has been a substandard campaign, including a 15-5 loss to North Reading in the first meeting between these clubs.

Lynnfield nearly succeeded. Starting pitcher Ben Mullin was impressive, allowing just three hits, but it was the outstanding defense behind him that preserved the one run lead for nearly the entire game.

“In the first six innings, that was probably one of the best defensive performances that I’ve seen from Lynnfield in a long time,” said North Reading coach Eric Archambault. “They had four players – leftfielder, shortstop, third baseman, and first baseman – that took basehits, sometimes doubles, away from us. We told our kids to keep their heads up – that the hits would soon drop for us.”

Earlier in the season, Archambault commented that hitting can often be contagious. That is certainly a suitable description for what took place in the seventh, after Fischer’s RBI-bunt tied it at 1-1. Nick Doucette and Matt Ryan scratched out back-to-back singles to load the bases. Craig Rubino was next, chopping one to first base and drawing a throw to the plate. The ball skittered away and Ryan Labb, who was pinch-running, scored the go-ahead run. Doucette, Ryan, Rubino, and Alex Carucci also scored in the frenetic sequence before Lynnfield reliever Rob Higdon managed to stem the tide.

While many contributed to this pivotal win, the game ball without question belongs to North Reading pitcher Tim McCarthy, who went the distance. The senior hurler pitched a gem, throwing strikes and keeping the potent Lynnfield bats at bay while patiently waiting for his teammates to provide run support.

“He was absolutely phenomenal,” said Archambault of his starter, who scattered seven hits and fanned five. “He got out a few jams early and it changed the whole complexion of the game. To be down by just one run heading into the seventh was huge. There’s something in him that responds after we lose a game. He’s a senior leader and has been great all year. He pitches best when we need it most.”

“You just have to stay focused and pound the strike zone while the defense does their job,” said McCarthy. “We have a lot of trust in our defense. It took us a long time to qualify for the tournament but it feels good to be here.”

“We’ve had an up-and-down season,” said Archambault. “We’ve had injuries, faced adversity, and times have been tough. It has been a next-man-up mentality with these guys. Whenever their number is called, for a variety of reasons, they’ve always been ready to go.”

On Thursday night, the North Reading Hornets will wrap-up the regular season with a visit to Weston, a team they defeated on opening day. Beyond that, the pairings for the tournament will be announced early next week.