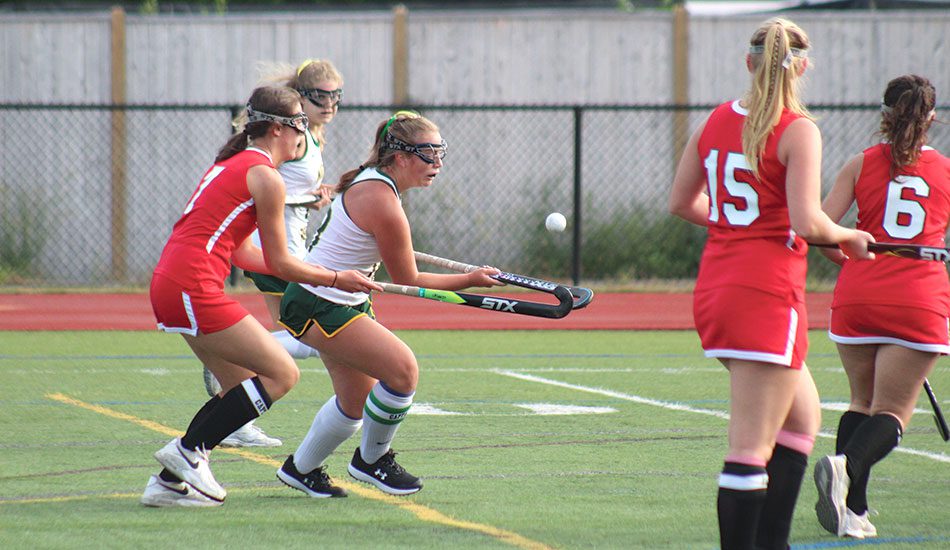 NORTH READING — The North Reading High field hockey team had its two-game winning streak snapped on Tuesday afternoon as they lost at Ipswich 4-1 on a warm, sunny day. With that result, the Hornets fell to 2-2-1 overall and 1-2-1 in the Cape Ann League.

“They have a very talented team,” said Hornets head coach Andrea Slaven. “We also did not make the proper adjustments we should have made.”

Ipswich took command in the opening half, scoring three times. Their fourth tally came in the fourth quarter.

Mary Majeski, the Hornets top scorer, was able to score with a little over a minute left in the game to avoid the shutout.

Emma Mini (2-2-1), was kept busy in net as she made 12 saves as the Tigers dominated the territorial play scoring on three corners.

Slaven also was pleased with the play of junior defenseman Karleigh Budny who made two defensive saves.

On Sept. 16, the Hornets won their first league game as they beat visiting Amesbury 4-1.

The Indians scored first with 28 seconds remaining in the first quarter. That lead lasted until the third when the locals started to turn the tide.

“We came out flat that first half,” admitted Slaven.

Alyse Mutti tied the game with 6:01 left assisted by Majeski. Keely Hannon scored, what turned out to be, the game-winning goal with 2:16 left in the third and that tally was unassisted.

Majeski then assisted on the two goals in the fourth. Kiersten Fortin scored the third goal with 13:11 left. Freshman Lilly McTeague then scored her first-career goal with 7:58 left to round out the scoring.

“I am very proud of the way Mary is setting her teammates up,” said Slaven, about Majeski’s three assists. “She is showing a lot of leadership skills.”

Mini made four stops in net.

North Reading’s next game is Sept. 23 at Triton. That game is a night one starting at 6:30 p.m. The Hornets then have a very tough test on Sept. 28 as they go to Newburyport. That game will start at 4:30 p.m.