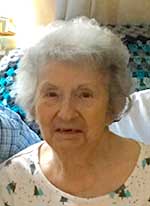 Iola was born in Wakefield on April 22, 1925 and was the daughter of the late Antonio and Antonia (Micalet) Sava. She was raised and educated in Wakefield and had been a member of the First Baptist Church. She had worked for Welling Alloys, Transitron Electronics and later for D.R.C. from which she retired in 1991.

Visitation for relatives and friends will be held at the McDonald Funeral Home, 19 Yale Ave., Wakefield on Thursday, August 13 from 4-7 p.m. Private interment will take place at the VA National Cemetery in Bourne.