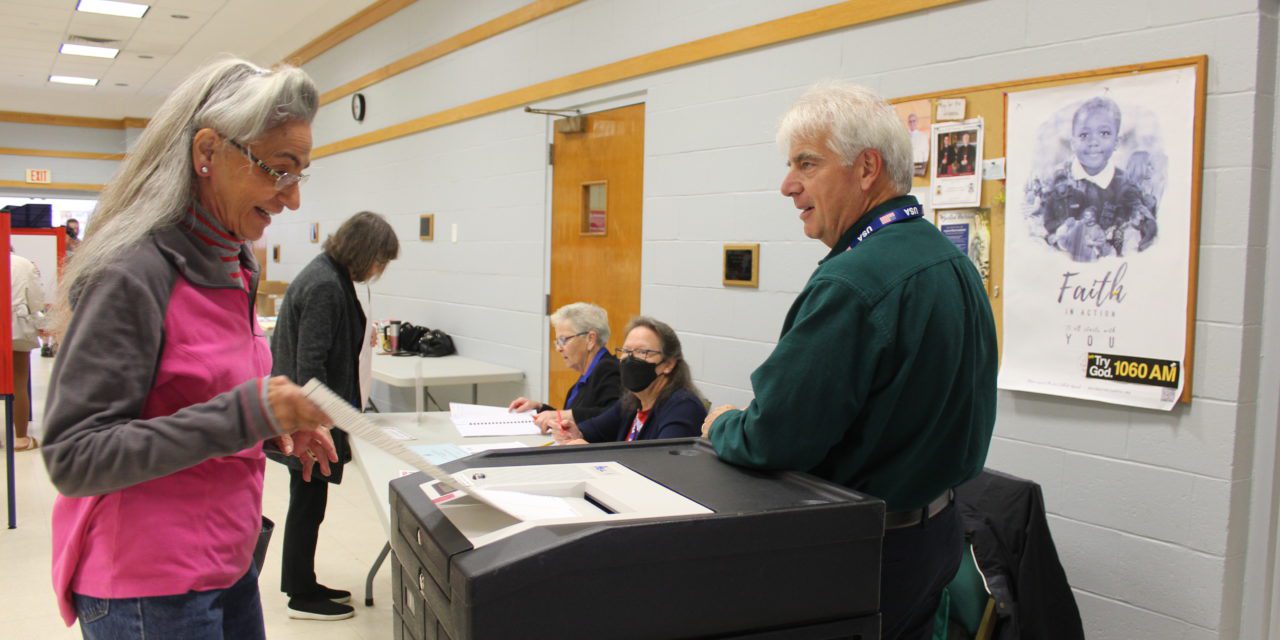 ELECTION DAY was a role reversal for retired Town Clerk Barbara Stats who simply cast her ballot at the polls on Tuesday morning. Since she no longer runs these elections she had a chance to chat with poll workers she had worked alongside for decades, including Tom Vozzella (at right). (Maureen Doherty Photo)

NORTH READING — A Blue tsunami overtook the Red wave that had been predicted by many a pundit in Massachusetts in Tuesday’s mid-term election.

With a 61 percent voter participation rate in town, the majority of North Reading’s voters rode the tsunami that swept an all-Democratic slate of candidates into the state’s executive offices, led by the Maura Healey/Kim Driscoll ticket for governor and lieutenant governor over Republican challengers Geoff Diehl and Leah Allen.

Similarly, for Attorney General, Democrat Andrea Joy Campbell garnered 3,754 votes vs. the 3,346 votes for her Republican challenger, James R. McMahon III. A total of 217 blanks were cast and there were three write-ins.

Incumbent Democrat William Francis Galvin retains his seat as Secretary of the Commonwealth. Locally, he picked up 4,371 votes over GOP challenger Rayla Campbell who polled 2,705 votes for a margin of victory of 1,666 votes. Green-Rainbow party candidate Juan Sanchez got 96 votes and there were 144 blanks and two write-ins.

In the race for state Treasurer, incumbent Democrat Deborah B. Goldberg retained her seat. Locally, she received 4,431 votes. Challenger Christina Crawford, a Libertarian, got 1,752 votes here. There were 1,099 blanks cast and 38 write-ins from North Reading voters.

In the five-way race for state Auditor to replace outgoing Auditor Suzanne Bump, who chose not to run for re-election, local voters chose Republican Anthony Amore (3,366 votes) over Democrat state Sen. Diana DiZoglio (3,181 votes). DiZoglio, however, has been declared the winner statewide and Amore conceded. The other candidates running for that office were Green-Rainbow Party candidate Gloria A. Caballero-Roca (85), Workers Party candidate Dominic Giannone III (87) and Libertarian Daniel Riek (134). There were 464 blanks cast and three write-ins.

The town’s representative in Congress will remain Seth Moulton. The Salem Democrat polled 3,953 votes in town to defeat challenger Bob May, a Peabody Republican who polled 3,043 votes. A third-party candidate, Libertarian Mark Tashjian of Georgetown, got 118 votes and there were three write-ins.

For Councillor, incumbent Democrat Eileen R. Duff (3,546) withstood the challenge locally by Lynnfield Republican Michael C. Walsh (3,325) by a slim margin of 221 votes. There are 444 blanks and five write-ins.

Also uncontested was Sheriff Peter J. Koutoujian, a democratic candidate who got 4,726 votes. There were 2,430 blanks and 164 write-ins.

The statewide results of the four ballot questions, with 86% to 87% of the precincts reporting as of press time Wednesday morning, per The Associated Press, were as follows:

Question 2: Regulate dental insurance to require 83% of premiums to go toward dental care.

Question 3: Regulate retail liquor licenses, the sale of alcoholic beverages and accept out-of-state licenses as a legitimate form of identification.

Question 4: Uphold state law allowing a standard driver’s license to be issued to those not living legally in the U.S., set to be implemented in July 2023.

In North Reading, voters bucked the statewide trend on two of the four questions.

On Question 2, North Reading voters agreed with the statewide majority  approving dental insurance regulation by a margin of 2,528 votes with 4,841 voting in favor of the measure and 2,313 opposed with 166 blanks.

On Question 3, North Reading voters agreed with the statewide majority and were not in favor of an expansion of the current liquor license regulations by a margin of 1,289 votes, with 2,885 voting yes and 4,174 voting no with 261 blanks.

On Question 4, North Reading voters sought the repeal of the law enacted this past year by the Legislature that will enable individuals not living legally in the U.S. to apply for a standard driver’s license [not a Real ID] as of July 2023. A total of 3,985 voters opposed the new law locally and want it to be repealed while 3,162 voted in favor of it.