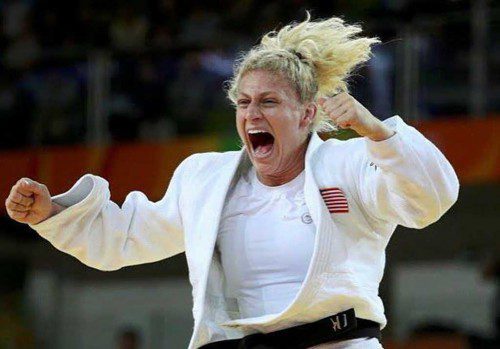 KAYLA HARRISON will appear at Hunt’s Photo & Video on Main Street in Melrose on Sept. 17.

The 26-year-old Kayla, who trains at Pedro’s Judo Center in Wakefield, will be available for autographs and photos as she advocates for her Fearless Foundation, which supports victims of childhood sexual abuse through education and sports.

Having returned from the Rio Olympics with her second gold medal, this accomplished judoka has been vocal about the need to help these children, since she too was a victim of sexual abuse.

According to the Fearless Foundation’s website, its mission is to “shine a light on the darkness that is child sexual abuse and to enrich the lives of survivors through education and sport, leading survivors to mastery and enabling them to flourish in all aspects of life. The Foundation is currently at work on an educational tool to help survivors understand that they are not alone and to empower them with the strength to come forward and seek the help that is available. It is also designed to educate the general public as to the common warning signs of child sexual abuse. The Founfation is also designing a health and wellness program using judo to help survivors achieve physical strength and fitness as well as the emotional strength and fitness that comes from increased self-confidence and mastery.”

Which is what happened to Kayla. As a young girl training in Ohio, she was sexually abused by a coach. Her mother sent her to the North Shore of Massachusetts to get away from the abuser. She soon fell in with Jimmy Pedro and his father at the judo center in Wakefield and eventually became the best in the world at her sport.

Hunt’s Photo & Video does a lot of network TV advertising and his summer did a Comcast spotlight campaign during the Olympics. Comcast felt that since Hunt’s has been a good supporter of the company, the photo and video retailer deserved to host an event with Kayla Harrison as the guest. The deal was set up through Kayla’s agent, Jerry Solomon of Lynnfield.

Saturday, Sept. 17, will be your chance to “get on the mat” with this two-time Olympic champion while supporting the Fearless Foundation.

Although there is no charge to attend this meet and greet, organizers ask that you consider a contribution to the Fearless Foundation.