Once a Warrior, always a Warrior 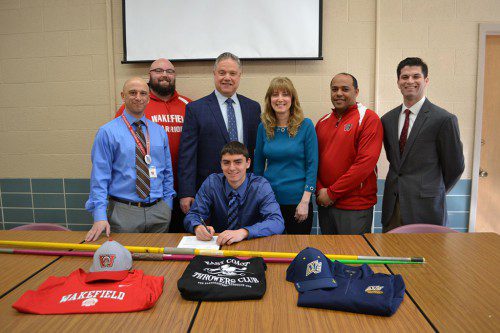 WAKEFIELD — Recently graduated WMHS track and field standout Kevin Russo signed his letter of intent with Merrimack College to join its varsity track and field team to throw the javelin.

While at Merrimack College, he will be majoring in business.

Russo is a three-time Nationals qualifier, twice with the emerging elite and once in the championship group.

The senior had quite a few accomplishments in indoor track as he competed in the high jump, 55 meter dash and 4×200 relay. Russo was with the varsity for four years.

Russo had many achievements in his three years of varsity on the boys’ outdoor track team throwing the javelin and running the 100 meters, 200 meters, 4×100 relay and 4×200 meter relay.

His PR in the javelin is 187-1. He finished second at the All-State Meet and first in the Div. 3 meet. He is currently getting ready to compete tomorrow in the New England Championship Meet in New Britain, Conn.

Russo was second in the javelin at the Middlesex League Championship Meet.

He qualified for Div. 3 states all three years and qualified for All-States as a sophomore in the 4×100 relay and in the javelin his junior and senior years.

This year, he has qualified for the championship level at Nationals in the javelin.