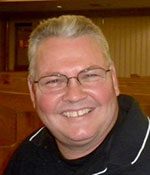 Hervey was a communication technician for FEMA of Maynard. He was a member of Holy Family of Nazareth Parish and Sons of the American Revolution.

Hervey D. Lafond Jr. was a dedicated father, husband and soldier. He graduated from Northeast Metropolitan Regional Vocational School in the Class of 1973. After high school he joined the United States Army making rank of Warrant Officer 2 in the Special Forces. He served nine years of active duty and a total of 35 years including the Massachusetts Army National Guard. In his in time in Afghanistan during Operation Enduring Freedom, he earned the Bronze Star Medal. He earned his master’s parachute badge and trained in anti-terrorism force protection.

He continued his education at the Control Data Institute where he studied computers from 1983-1984. When he returned from his active tour of duty he soon started to work for FEMA as a telecommunication specialist in 2004 and retired in 2016.

He is survived by his wife, Ann (Lamolinare) Lafond of Lancaster; one son, Daniel Lafond and his wife Flavia of Leominster; one daughter, Lea Lafond of Lancaster; one stepson, William Antonucci and his wife Deanna of Westminster; one brother, Craig Lafond and his wife Terri of Maryland; two sisters, Cindy Fortune Cook and her husband, William Cook MD, of Amesbury and Cheryl Drews and her husband Phillip of Wakefield; one stepsister, Caren Vanderley, of Belmont, along with many nieces and nephews.

He enjoyed his many travels with the military and with his
family. Within his travels he
enjoyed hunting, skiing, farming and fishing.

Mr. Lafond’s funeral will be held Monday, June 13, with a Mass of Christian Burial at 11 a.m. in Holy Family of Nazareth Church, 750 Union St., Leominster, with Military Honors. Burial will be at a later date. There are no calling hours.

To light a candle, sign his guestbook or leave a message of condolence, please visit www.wrightroyfuneralhome.com.