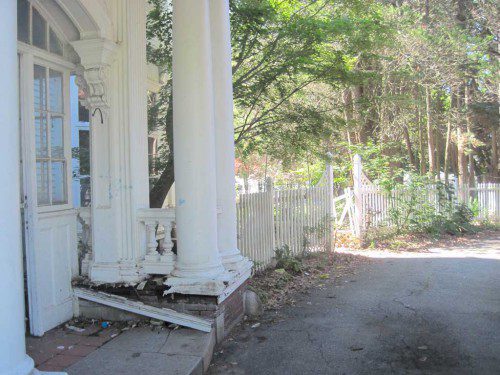 CRUMBLING columns are only the beginning of problems at the 10 Mansion Rd. mansion. In its heyday, the home was as magnificent as anything seen on “Downton Abbey.” (Gail Lowe Photo)

WAKEFIELD — The once stately manor at 10 Mansion Rd. sits hidden behind such an overgrowth of trees, brush and vines the front is barely visible. There’s at least one broken window on the second floor and the grounds are strewn with trash, including an old mattress.

The mansion is known as the Charles Winship House and is one of Wakefield’s historic homes. The two-and-a-half story building was built between 1901 and 1906 for Winship, co-proprietor of the Harvard Knitting Mills, a major business from the 1880s through the 1940s. The house was listed on the National Register of Historic Places in 1989.

According to the Assessor’s office, the property is valued at $1.4 million. Current taxes are reported as $19,551. The total building area is 13,392 square feet on a little more than an acre of land.

In its glory days, the mansion was quite the property. According to zillow.com, the home boasts 11 bedrooms and eight bathrooms. At the front of the property, there’s a wide, roofed porch supported by 10 Corinthian columns. The roof is topped with a widow’s walk surrounded by a balustrade. There’s also a circular portico out back, multiple bay and palladium windows and a swimming pool.

The interior was once a stunning blend of natural woodwork, possibly mahogany, winding staircases, a massive foyer and special rooms set aside for music and reading. In fact, a book by M.A. duBarry was spotted lying in the grass, suggesting perhaps that the owner had a fondness for bodice rippers. In short, it’s the type of mansion befitting “Downton Abbey.”

But today, the mansion is nothing but a former shadow of itself. And a magnet for youths looking to get into mischief.

Since January 2014, police have logged a total of 47 calls from neighbors complaining about trespassing youths.

Police say that drugs, sex and vandalism take place on the grounds. One neighbor who asked not to be identified said that police cruisers are there almost every night, shooing away kids.

The most recent call to police came on Monday night, July 13, from someone who said three carloads of youths had pulled up in front of the mansion. The intent of the youths was not known but had they accessed the property, they would have been guilty of trespassing.

Another call to police earlier in July was made by a neighbor who said he heard loud “banging” going on at the mansion.

It turns out that another neighbor was trying to secure a door to keep vandals and youths out. The door is now padlocked, as are other doors to the mansion.

“Word has spread to other towns that the property is vacant,” said Lt. Steven Skory. “The inside is massive and youths have found ways to get in.”

The mansion, said one neighbor, has become “an eyesore” and said he wishes “they” would do something about it.

“They” may be Altisource, a company that posted a sign on a rear door on Jan. 23 this year. Or “they” might be Wells Fargo, the bank that handled a foreclosure on the property in May 2013.

Town Administrator Stephen P. Maio, Board of Health Director Ruth Clay and Building Inspector Jack Roberto have met periodically to discuss what can be done about the mansion, but their hands are tied. In fact, several weeks ago, the trio met with Town Counsel Tom Mullen to see what could be done. So far, the Board of Health arranged for the securitization of doors, and Roberto ordered that a fence be constructed around the swimming pool. Clay ordered spraying for mosquitoes in the pool area.

According to Roberto, trespassing is a police matter but other matters are not. The swimming pool, in particular, was something that greatly concerned Roberto.

“There was no fencing around the pool, so I finally got in touch with Altisource and I ordered that a fence be put up around the pool,” he said, adding that it was no easy matter contacting Altisource because the company is in the Philippines and there is a time difference to contend with. Roberto also said the fence order was a tricky matter because the pool might have been determined to be “grandfathered in,” which would mean that a fence is not even required.

Though the pool was drained of water, rain water could have accumulated, said Roberto. “If there are 24 inches or more of water, it’s considered a pool,” he explained.

According to Wakefield’s Tax Collector’s office, real estate taxes are in arrears, but only for the last quarter. Mullen said that at the time of foreclosure, Theresa Whitaker was listed as the homeowner and the bank holding the mortgage was Wells Fargo. A government website shows that Whitaker applied for bankruptcy in August 2010. According to an online document, she also filed for Chapter 11 bankruptcy in 2004 in the United States Bankruptcy Court, which allows for the reorganization and restructuring of debts. The company handling the foreclosure is currently listed as Faneuil Investment Group, Limited Partnership in Milton. Atisource apparently is also involved in foreclosing the property but this could not be confirmed since a call placed to company officials on Tuesday, July 14 was not returned.

Mullen said that it is his hope that the bank that holds the title will sell the property.

“It’s been vacant for a long time and we will pursue a tax taking if we can,” he said. “If the building is opened in any way, we will send notice to the bank to close it.”

If this doesn’t happen, Mullen said town would take steps to close it.

“We would then lien the property for any costs,” he said.

Fire Department Chief Michael Sullivan, of course, is concerned about fire at the property. “We just hope it never happens,” he said.