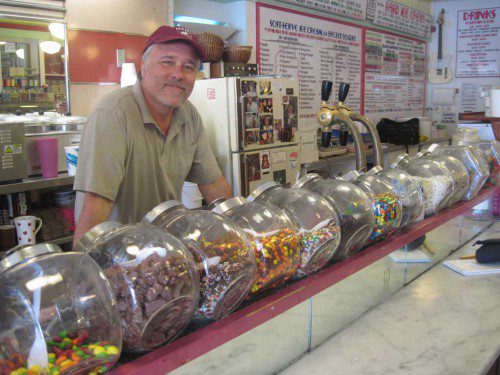 RICK CAMPBELL has been in the ice cream business for 22 years. He owns Cravings on Main Street, former home of Colonial Spa. (Gail Lowe Photo)

WAKEFIELD — Beginning today, the Daily Item will publish on Fridays short reviews of ice cream parlors in town throughout the summer.

Yesterday, a visitor went to Cravings. This ice cream emporium is a throwback to the past and, in fact, occupies the previous home of Colonial Spa — a store that sold everything from ice cream sodas to road maps and even Cliff Notes.

Where else can you order an ice cream cone, frappe or sundae from the owner of an ice cream parlor who — in the visitor’s opinion — bears a likeness to Brad Pitt?

For the past 22 years, Rick Campbell has made from scratch all the ice cream he sells. His “batch freezer,” the machine he uses in the back room, was ordered custom made. He also offers custom blend soft ice cream and frozen yogurt. His French vanilla ice cream is packed with double strength pure vanilla extract, giving it a full-bodied flavor.

Campbell’s ice cream is dense and the various flavors that contain nuts — like maple walnut and butter pecan — are especially good because Campbell doesn’t chop the nuts into tiny pieces. The nuts at Cravings, including expensive macadamia nuts, pack a wallop because they’re practically whole.

Campbell explained that the ice cream people buy in supermarkets can be 50 percent air, and this practice, he said, is legal.

“Pick up two half gallon containers of ice cream — one with the store brand and the other a well-known brand, and you’ll feel the difference in weight,” he said.

Here’s a glance at Campbell’s seemingly endless menu of what some would consider exotic soft serve flavors:

In addition to cold summer treats, Campbell also stocks penny candy and chocolate truffles. Customers have their choice of enjoying ice cream treats at the counter on a stool that swivels or small table or outside the store.

Campbell takes his occupation all in stride and says that his flow of customers has been good almost every year.