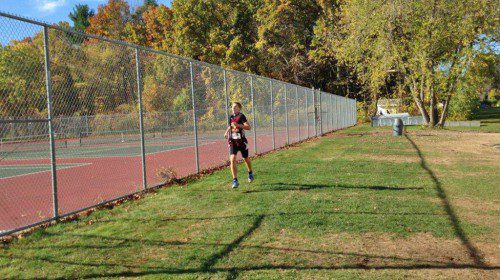 PATRICK McPHERSON was recognized as the top runner in the Commonwealth Athletic Conference this fall in cross country. McPherson is a senior at Mystic Valley Charter School.

Additionally, McPherson participated in the Massachusetts All-State Meet which was held at Franklin Park in Boston on Nov. 15. He qualified as an individual runner based on his result (McPherson was 23rd out of 206 runners) at the Eastern Massachusetts Divisional Meet in Wrentham  on Nov. 8.

After the banquet, Mystic Valley head coach Jon Bush heaped praise upon his runners, saying, “I am proud of the individual success that Patrick has achieved this season. Although he is naturally athletic and talented, his success is a product of hard work put forth both during practices and on his own. He is a model student-athlete in the classroom as well as on the course and his leadership and experience will surely be missed in the future.”