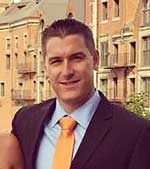 SALEM, N.H. — Paul E. Zurek Jr. of Salem, N.H. and formerly of Reading, passed away unexpectedly on Sunday, Oct. 2, after completing a half marathon with his wife in Hampton, NH., at age 36.

Paul was born in Stoneham on June 11, 1980, and was raised and educated in Reading. He graduated from Reading High School, Class of 1998, where he played hockey, made many lifelong friends and met his future wife, Jenessa.

He continued his education and hockey career at Assumption College where he graduated with a bachelor’s degree. Paul and Jen started dating after a first kiss on Long Beach, remained devoted to each other through college, and were married at St. Patrick Church in Stoneham on Aug. 4, 2007.

Settling in Salem, N.H., Paul was completely committed to Jen, his two young sons, Nathan and Cameron, and touched the lives of everyone he encountered in life.

Recently Paul found a position in medical device sales at Medtronic where he felt he could make a difference. Paul had an innate goodness – a genuine kindness that made a lasting impact on those around him. Working in the medical field, he was grateful for the opportunity to know he was helping people. Wherever he was, he was always eager to help and offered unconditional support and friendship to anyone he met, including family, friends, strangers and even animals.

After buying their first home, Paul arrived home and surprised Jen with a Chiapoo named “Callie.” Callie became part of the family, and another great friend of Paul’s. He loved playing hockey, rooting for the Bruins and going to Foxboro for snowy Patriots games with his longtime buddies.

Paul recently said that he was put on this earth to be a great father to Nathan and Cameron and he did everything he could to make that happen. He and Jen made a beautiful home for their family, with Paul working hard on home improvements or entertaining the boys. Together they loved tractor rides while mowing the lawn, playing street hockey, trips to Peach Tree Farm for ice cream or ice skating lessons. Paul knew it was important to Jen that the boys learn to swim, so he built a pool in the backyard to teach the boys. He adored Nathan and Cameron and wanted to be the best Dad he could be.

He and Jen shared a devotion and love for one another. Among many happy memories, they enjoyed frequent runs, nights out to dinner at his favorite restaurant, Grassfields in North Andover, and summer weekends spent in Brewster on Cape Cod. Paul worked hard at everything he did in life. His family, his friends, his career and his boys meant the world to him. He was above all, a dedicated and loving husband, son, father and brother with a tough exterior but kind, gentle and caring spirit.

The Zurek and Lanigan families, together with Paul’s extended family and friends, mourn his tragic loss but the imprint he has left behind on his two young sons remains as his legacy.

Relatives and friends will gather in honor and remembrance of Paul’s life for visiting hours at the Robinson Funeral Home, 809 Main St., Melrose on Friday, Oct. 7 from 3 to 8 p.m., and again on Saturday at 7:45 a.m. before leaving in procession to St. Patrick Church, 71 Central St., Stoneham for his funeral Mass at 9 a.m.

Gifts in memory of Paul may be made to the Zurek Children’s Education Fund, c/o Reading Cooperative Bank, 180 Haven St., Reading MA 01867.