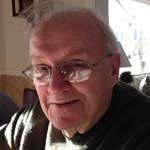 Mr. Sullivan was raised in Dorchester and was a graduate of Cathedral High School. He later served in the U.S. Army “Dixie Division” during the Korean Conflict.

A Wakefield resident since 1963, he was an active member of the Most Blessed Sacrament Church and was a past member of the Knights of Columbus. He had worked at and retired from the Sears, Roebuck & Company after 45 years as a sales representative.

His funeral will be held from the McDonald Funeral Home, 19 Yale Ave., Wakefield on Thursday at 9 a.m. followed by a funeral Mass in the Most Blessed Sacrament Church, 1155 Main St., Wakefield at 10 o’clock.

Interment will be at Forest Glade Cemetery in Wakefield. Visitation for relatives and friends will be held at the Funeral Home on Wednesday from 4 to 8 p.m.